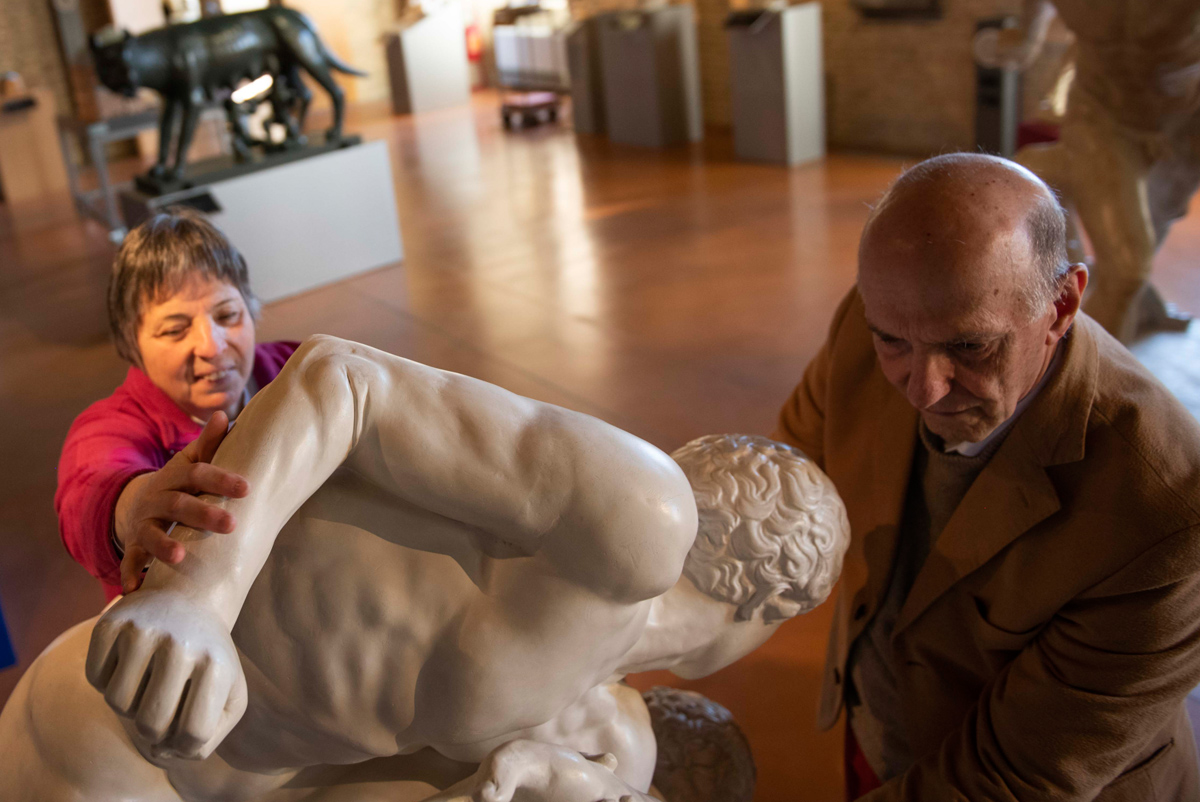 The State Tactile Museo Omero – past, present and future.

In 1985, Aldo Grassini and his wife Daniela Bottegoni had an idea. These non-sighted travellers, Esperantists and art lovers had become so exasperated by the “Do not touch” signs found in every single museum, that they decided to create a museum where everything could be handled.

In 1986, the idea found an efficacious supporter in Rosa Brunori Ciriaco who was an executive in the Regione Marche Social Services department. On 29 May 1993, after years of applications and meetings, the Municipality of Ancona (with the support of the Marche Region and the Italian Blind Union) founded the Museo Omero, which began its life in just three classrooms of the Carlo Antognini Elementary school in Ancona. Its collection comprised 19 plaster copies of classical sculptures and an architectural model. The collection gradually increased and, in 1997, the museum moved to the Donatello schools in via Tiziano, Ancona, where it took over an entire wing.

In 1999, the Italian Parliament granted it the status of State Museum (Law 452 of 25 November 1999), in recognition of its unique value to the nation. The purpose of the Museum, as stated in Article 2 of the aforementioned Law, is “to promote the cultural growth and integration of visually disabled people and to spread knowledge of reality among them”.
From the start, the Museum has rejected the idea of being a place reserved for blind people. Its aim has always been to provide a welcoming, enriching, barrier-free cultural space for everyone.

As set out in the convention signed by the Municipality of Ancona and the Ministry of Culture (3 August 2001, modified 22 February 2002) and the subsequent Regulation, the Museum is directed by a Management Committee, which is in office for five years and is supported by an Advisory Committee.

In the summer of 2012, the Museum moved to its final destination in the Mole Vanvitelliana in Ancona, where it occupies about 3,000 square metres, spreadover four floors.
These contained a provisional exhibition area on the first floor, where part of the collection was put on display, enlarged learning workshops and offices, a conference hall, documentation centre and other exhibition spaces for exhibitions and events.

In September 2017, the restoration was finally completed and the entire collection found its new home on the second and third floors. At present, there are around 200 works in the collection: copies of classical masterpieces in plaster or resin, architectural models, original contemporary sculptures and obejcts of Italian design.

The rooms are permanent, the layout is still provisional.

On 29 May 2018, the Museum celebrated its 25th birthday. Many of the people who helped to make the museum what it is today were present. Tributes were paid to Roberto Farroni, director of the Museum from 2002 to 2011.

Inaugurated on 18 December 2021, the Design Collection is a new space inside the Mole Vanvitelliana where visitors can get to know 32 iconic examples of Italian Design. Like the Museo Omero, it was deliberately created to be a place for multi-sensory experience. Our new space was donated by the Associazione “Per il Museo Tattile Statale Omero ODV-ONLUS” and incorporates the Museum’s aims and exhibition methods.

Our next step: the new, definitive layout of the collection with an innovative, multi-sensory, technologically-advanced pathway.

The Museum has been part of the Direzione Regionale dei Musei delle Marche del Ministero della Cultura since 23 December 2014.

Since 13 July 2017, the President of the Museo Omero, Aldo Grassini, has been a member of the Working Group, which was set up by the Direzione Musei del Ministero della Cultura, to formulate measures aimed at overcoming cultural, cognitive and psycho-sensory barriers in the places of culture in the Ministry’s charge. (Executive decree of 27 June 2017). The group drew up the Guidelines for drafting the Architectural Barrier Elimination Plan (P.E.B.A) issued on 6 July 2018.

On 20 August 2018, the Museo Omero was nominated as a body qualified to train teachers as set out in Ministerial Directive 170/2016 of the MIUR, Dipartimento per il sistema educativo di istruzione e di formazione, Direzione generale per il personale scolastico.

The Museum is also part of the Mira museum network – Museums in the Ancona network.