Posted in Exhibitions on 26 September 2007 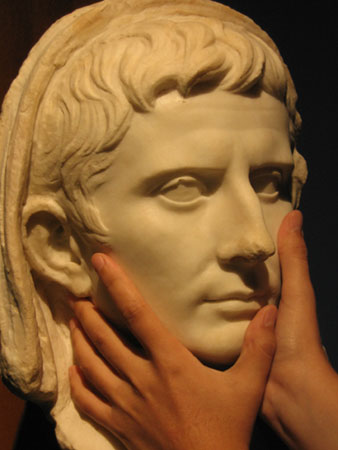 Inauguration: Saturday 29 September 2007 at 5.30pm.
Museo Tattile Statale Omero.
The exhibition will be open until 30 Septmber 2008.

The Museo Tattile Statale Omero and La Soprintendenza per i Beni Archeologici delle Marche in collaboration with Effetto Luce Recanati has organized a tactile exhibition featuring the ''Augusto capite velato'' - a sculpted, veiled head of the first emperor of Rome.
The technical ability and the stylistic refinement evident in this sculpture make it truly exceptional.
This symbol of the magnificence of the Roman Empire was on show at the Museo Archeologico Nazionale delle Marche until the earthquake of 1972 but has unfortunately been in storage up until now, when it has deservedly come back to the light and the admiration of the public.
But the candid marble of this splendid face will not only be appreciated by our visitors' eyes. The hands of the visually handicapped and, suitably gloved, the sighted public will be able to explore the work and ''savour'' with emotion the memory of time, the language of the material and the perfection of the form.

A unique event which underlines the Museo Omero's constant efforts to make original works of art, and not only copies, accessible in a multi-sensory manner. Special thanks are due to the Soprintendenza per i Beni Archeologici delle Marche who have made this exhibition possible, demonstrating once again their dedication to establishing and spreading the ideal of a barrier-free access to culture.

The work came to light in 1863 near the Palazzo Ferretti, Ancona (seat of the Museo Archeologico Nazionale delle Marche) and is a most important relic of the early Imperial period.
It consists of a portrait head of Octavianus Augustus Caesar (63 BC - 14 AD) wearing the characteristic veil of the Pontifex Maximus, the highest religious rank in ancient Rome. It would most probably have been collocated in the city Forum. The most immediate comparison is with the statue of Augustus Pontifex Maximus which was found in Via Labicana in Rome.

The masterly execution and the quality of the material of the Ancona portrait head make it a most interesting object. The stylistic characteristics suggest that it dates from the latter years of his reign (the early first century AD).
A sculpture of great artistic and historical importance, sign of an era, the Roman, when a European identity first began to take shape and a fitting celebration of  European Heritage Day 2007.

Learning activities:
We have organized special workshops on the theme of the exhibition.
For further information and bookings, please contact:
Tel. 0039.071.2811935.
The workshop costs Euro 2.40 per pupil;
The guided tour costs Euro 1.20 per pupil;
They are free for the disabled and their helpers.