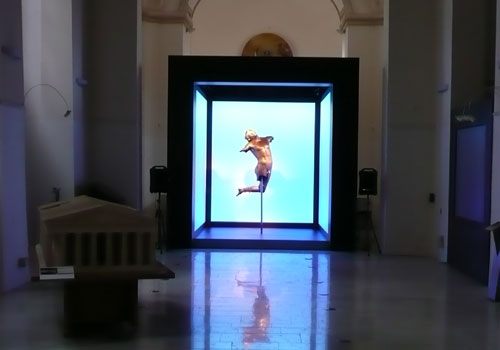 The Museo Omero, the only state tactile museum in Italy and an international example of art education for the visually handicapped, “touches” another great European capital: Prague.
In the splendid Palatine chapel of the former Ospedale degli Italiani, seat of The Italian Cultural Institute of Prague, the city of gold will host a large part of the Museum collection in the Umano Divino exhibition, a project championed by Fabio Pigliapoco, the Italian Ambassador in Prague.

More than twenty sculptures from the Museo Omero’s collection of original works and casts (which offer a brief history of sculpture from Phidias to Michelangelo, to Bernini) will be on display, along with selected sculptures by the non-sighted artist Felice Tagliaferri, works linked by the line of meanings contained in the title. As the architect Massimo Di Matteo, exhibition curator, points out when explaining the reasons behind the selection and lay-out of the works, “The Human and the Divine are two distinct categories which find significant points of contact and cross-fertilization in many works of art.” In Ancient Greek art, the Human and the Divine are merged in a single model of harmonious proportions (Strangford Apollo, Poseidon), the Temple (Parthenon) is a dwelling-place for a God constructed by man; in western Christianity the main theme represented in sacred art is human pain as part of the divine plan of redemption (Pietà di San Pietro and Pietà Rondinini by Michelangelo). In mystical experience, the Human and the Divine tend to meet through an irrational route (the Satyr of Mazara del Vallo) or through ecstasy (the Ecstasy of Saint Theresa ,by Gian Lorenzo Bernini, Saint Francis by Vittorio Morelli). “In contemporary language” concludes Di Matteo, “Tagliaferri’s figures which are full of humanity (sweet, “sfumato”, carnal, dramatic such as Maternity, the Man who imitates horses), speak to us of the mystery of life.”

Also in Prague is The Dancing Satyr of Mazara del Vallo, from the “Conoscere la Forma” (Know Form) project: a perfect copy of the splendid sculpture attributable to Praxiletes, fished out of the Sicilian Channel in 1997. The exhibition offers various intriguing ways of reading the work thanks to the intervention of iGuzzini lighting specialists, in collaboration with the Physics Laboratory of the Istituto Centrale per il Restauro di Roma and with specialist help from the Museo Omero.

An exhibition for visual and tactile exploration

The well-established collaboration between the Museo Omero and iGuzzini took the “Dancing Satyr” to the Louvre museum in 2007 for the “Praxiletes” exhibition. All the works on show can be explored by touch thanks to the collaboration of the National Gallery of the Exhibition Hall in Prague. Audio and Braille learning aids, created by the SONS (a Czech organization corresponding to the Italian Union of the Blind and Partially Sighted) are also provided.

The exhibition will be inaugurated on 18 November and will run until 31 January 2009: It is promoted by the Italian Embassy in Prague, The Italian Cultural Institute, Prague and by the Museo Tattile Statale Omero which is setting up the exhibition. The following have also contributed to the exhibition: the President of the Marches Regional Council, the committee chairmen of the Marches Regional Council, the Chamber of Commerce of Ancona and the Cerna Hora brewery. The exhibition enjoys the patronage of the Province of Ancona and Ancona City Council. Thanks also go to Lucesole Trasporti, Unipol Assicurazioni and Etna, iGuzzini’s distributor in the Czech Republic. L’Accademia dello Stoccafisso will be organizing a special evening to introduce one of the best traditional dishes of Ancona accompanied by local wines.

“The Museo Omero is a credit to Ancona“ - commented Ambassador Pigliapoco – “and I am proud to introduce it to Prague. It will be the event of the year and we look forward to welcoming the Minister of Culture of the Czech Republic, the Mayor of Ancona Fabio Sturani, the representative of Province of Ancona Patriza Casagrande, the director of the Italian Cultural Institute Umberto Rinaldi and several representatives of Czech and Italian institutions who will be attending the inauguration. Maximum publicity will be given to the event, including special promotion in the schools and academies so that it can be enjoyed not only by the visually handicapped (naturally) but by everyone”. “The Prague exhibition crowns our efforts to make a unique institution better known.”- says Roberto Farroni, Director of the Museo Omero - “This can only help to increase people’s awareness of the need for barrier-free culture”.