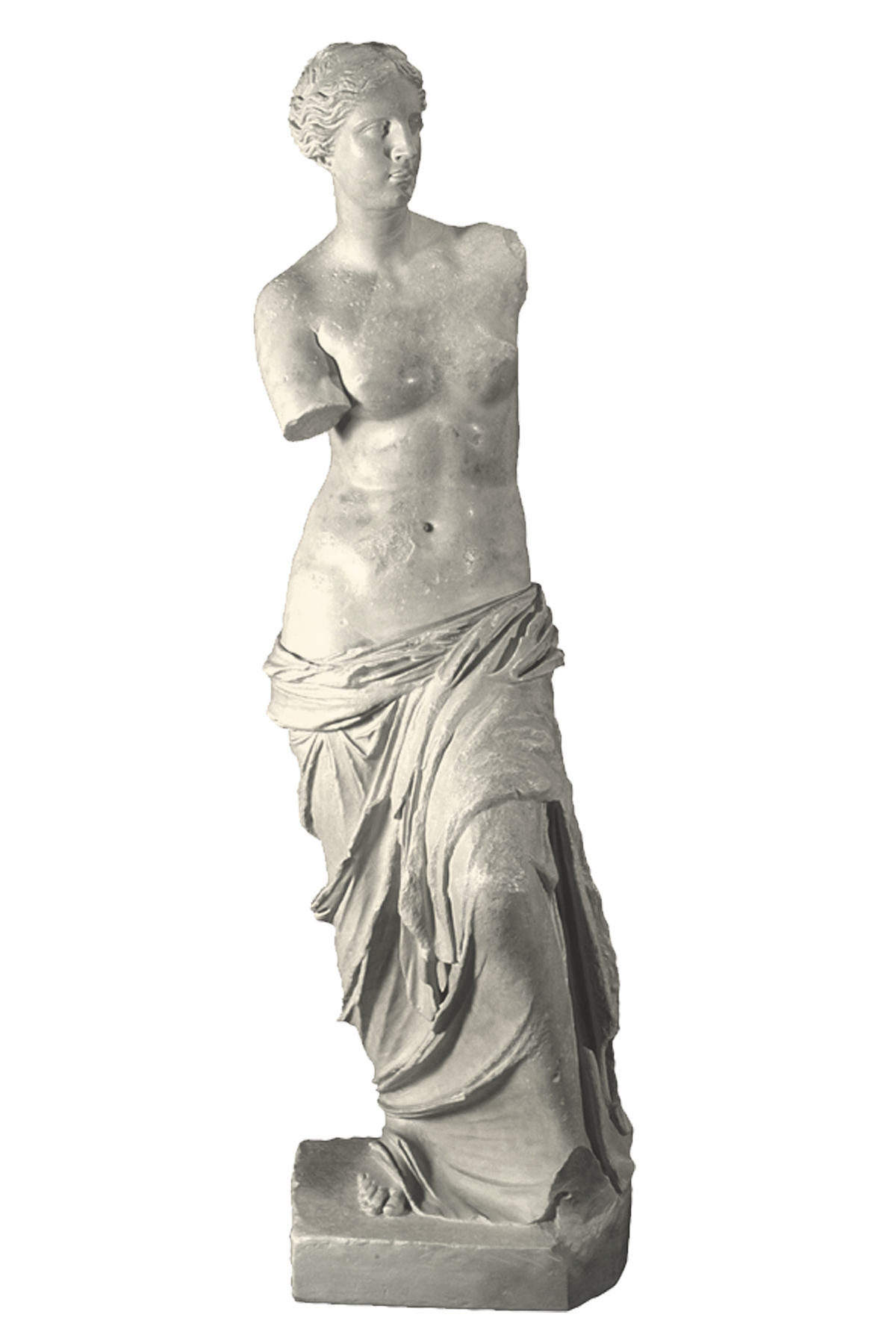 Before thee, Goddess, and thy coming on,
Flee stormy wind and massy cloud away,
For thee the daedal Earth bears scented flowers,
For thee waters of the unvexed deep
Smile, and the hollows of the serene sky
Glow with diffused radiance for thee!

The celebrated Venus de Milo, found on the island of Milos in 1820, was carved circa 130 BCE. This depiction of the goddess, which has become an icon of female beauty, would appear to be a copy of a lost sculpture by Lysippos.

We have two copies on show, each taken from a true cast. The first, plaster, copy belongs to the Museo Omero while the second, in resin, is on loan for use from the Louvre, which houses the original.

Just over 2 metres tall, the goddess is portrayed in a standing position. Her torso is naked but her lower body is swathed in a heavy, richly folded garment. Her posture is sinuous, the entire figure forming a sort of S. Her weight is supported by her straight right leg, while her left leg is set slightly forward with the knee bent and turned inwards, suggesting modesty. Her right shoulder is lower and further forward than the other, creating a shoulder line which parallels the diagonal of the gathered top of the drapery at her hips.

Her head is turned to her left, and its fine oval face is as typically Greek as her long straight nose. Her aloof composure is that of a goddess and is underlined by her expressionless face – a typical characteristic of the Classical period. Her hair is tied up with a ribbon and is finely modelled in a naturalistic, descriptive manner, as can be seen in the lock which has come loose from the ribbon and is hanging down on her neck.

The work feels smooth and compact to the touch and the intricate folds of the wrapped drapery at the hips can be clearly perceived. The statue was made in two separate parts and the fluted drapery serves to hide the joint between the blocks of marble.

The first nude portrayal of the Goddess Aphrodite would appear to be the Cnidian Aphrodite which was carved in marble by Praxilites in 360 BCE. It originally stood in the temple dedicated to the Goddess in Cnidus, an ancient city in Asia Minor, and was subsequently used as a model for the numerous studies of the goddess created during the Hellenistic Period. The Venus di Milo, portrait of the goddess of love and sensuality and symbol of antique beauty, is undoubtedly one of the most celebrated of these.