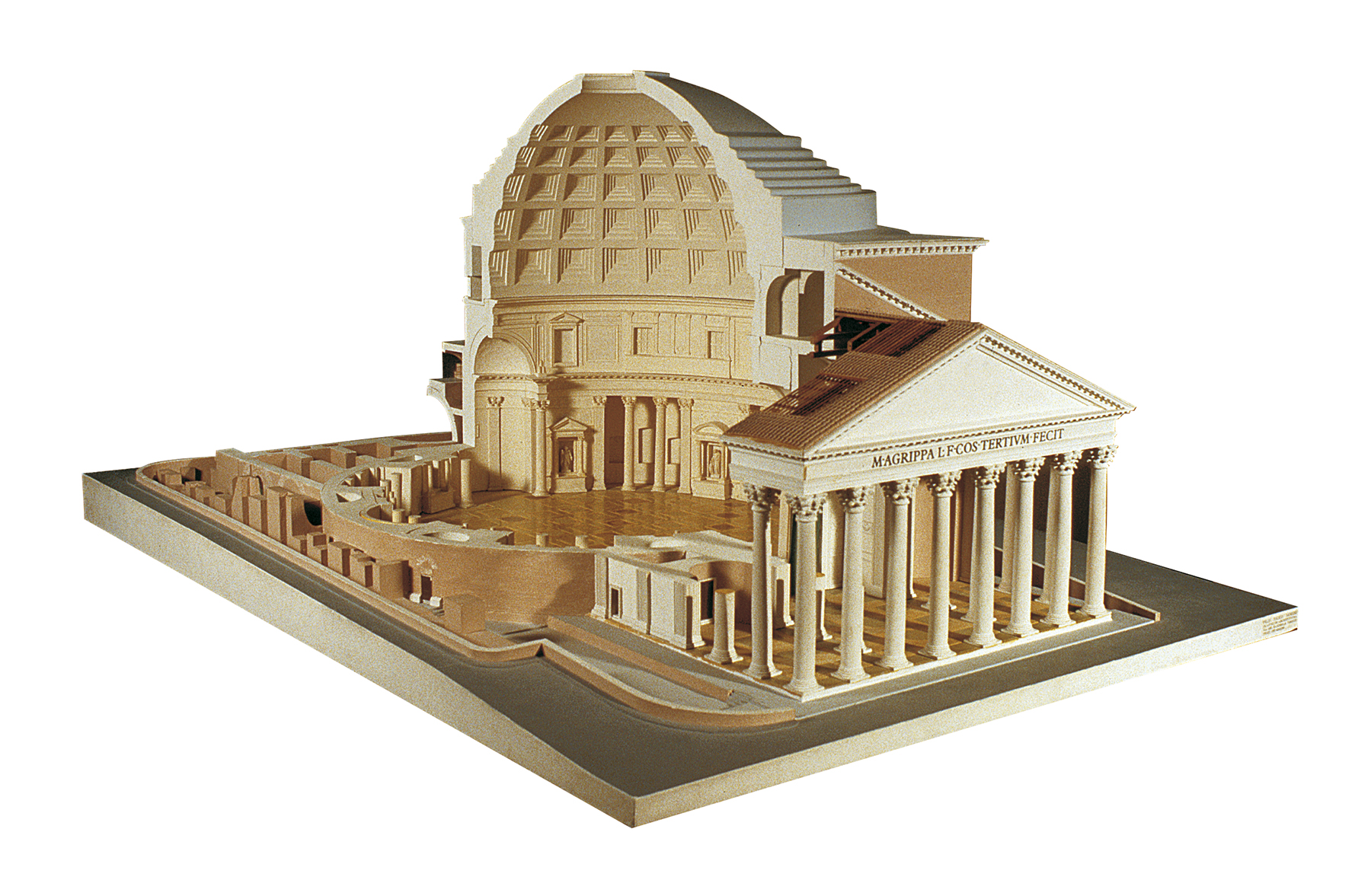 “The most beautiful remnant of Roman antiquity is undoubtedly the Pantheon. This temple has suffered so little that it appears to us as the Romans must have seen it in their time”. Stendhal, Roman walks

The model of the Pantheon in Rome, about 65cm high, is made of various materials such as wood and resins. It reproduces the building in detail showing its composition, decoration and colours.

The front of the building, the pronaos, is shown in full with 8 white columns in the front row, 4 in the second and 4 in the third row with the central space for access to the main door. The columns support the architrave, with its inscription that translates as “Marcus Agrippa, son of Lucius, made (this building) when consul for the third time”, that is, in 27 BCE. Above the inscription is the pediment, a triangular element with a pitched roof, whose bronze decorations have been lost.

Beyond the columns, we find the central entrance portal. From here on, the model is shown in section so as to make the internal parts explorable; half of the building is reproduced to its full height while the entire ground plan is shown. A cuboid-shaped vestibule stands between the portico and the large cylindrical central hall. The floor can be explored in its entirety and its geometry is also perceptible to the touch: a chessboard of multi-coloured marble squares that surround other figures such as the circle and the square.

Showing only half of the Rotunda allows you to explore both the external walls, whose finish is reminiscent of brick, and the internal ones, which are divided into two decorative zones. In the lower level you can perceive half of the apse which is located opposite the entrance door. Between them, a series of aedicules (shrines with statues) alternate with semi-circular or trapezoidal niches with columns in front. In the upper level, rectangular hollows alternate with geometric panels.
The interior of the large hemispherical dome can also be explored, where the five rows of sunken panels, called coffers, are clearly defined. They narrow in perspective towards the oculus, the circular opening at the top of the vault.

As its name indicates, the Pantheon was a temple dedicated to all the Roman gods. It was allegedly built on the site where Romulus, the founder of Rome, ascended to heaven after being struck by lightning during a religious ceremony. After being destroyed by fire, the Pantheon was rebuilt in its present form between 118 and 124 CE at the behest of Emperor Hadrian. In 608 CE, the Byzantine Emperor Phocas donated the temple to Pope Boniface IV who consecrated it to Christian worship, dedicating it to Santa Maria ad Martyres.

The large dome, reminiscent of the celestial vault, was once covered in gold. The celebrated oculus has a diameter of 9m, and allows light and rainwater to enter.

A symbol of the city of Rome, the Pantheon houses the tombs of some major cultural figures such as the Renaissance painter Raphael. Members of the former Italian Royal family are also buried there.