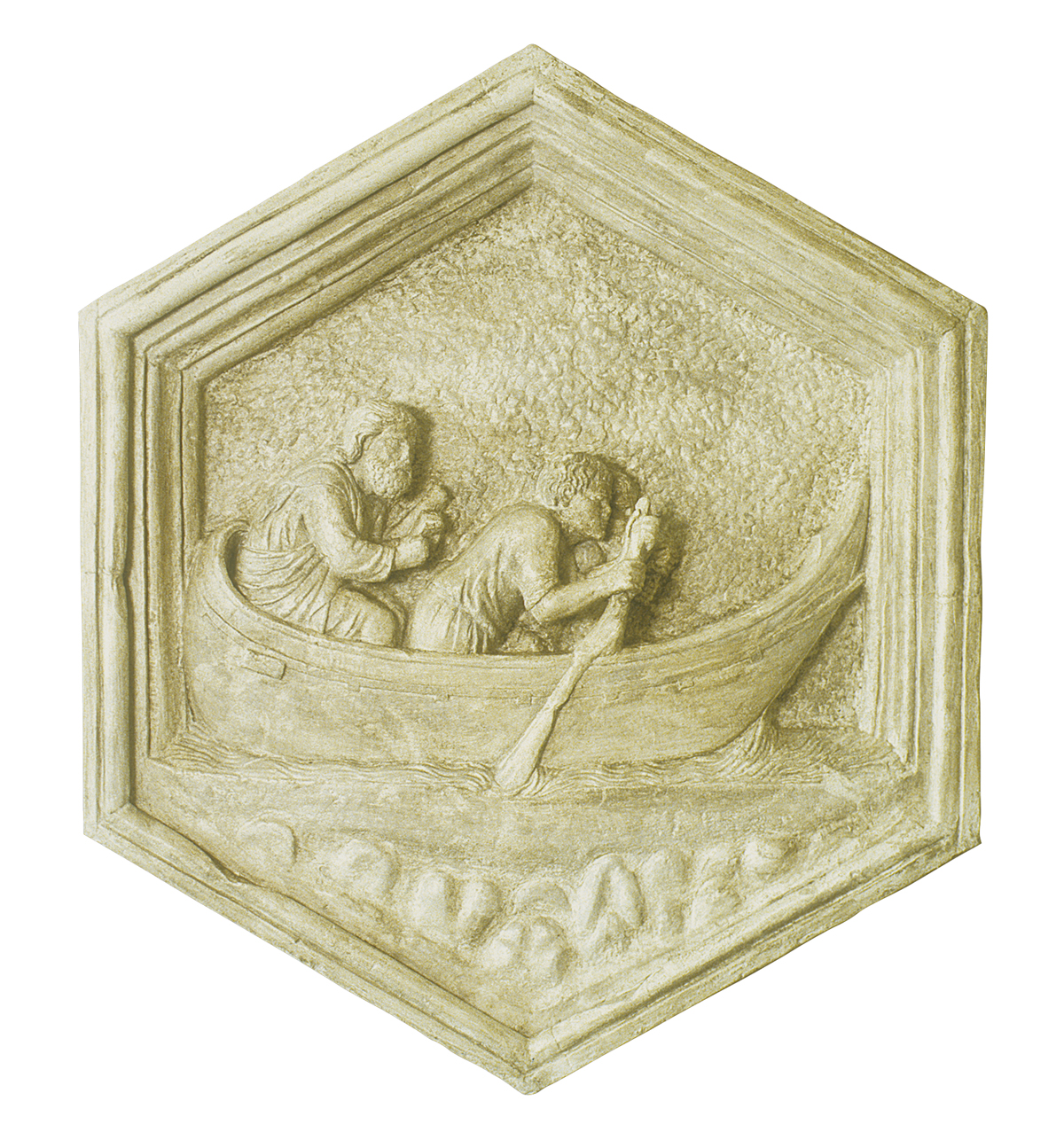 “This can be seen in Andrea Pisano, who, practising sculpture in Giotto’s time, made so much improvement in this art, that by practice and study he was esteemed in that profession the greatest man that the Tuscans had had up to his time”, Giorgio Vasari, “The Lives of the Most Excellent Painters, Sculptors and Architects”.

“The art of navigation by rowing” is the subject of this panel created by Andrea Pisano and his pupils in the mid-1300s for Giotto’s bell tower for the Cathedral of Santa Maria del Fiore in Florence.

The Museo Omero has an alabaster plaster copy of a true cast, about 44cm wide. The original, in marble, is on show at the Museo del Duomo in Florence. All the sculptural decorations on the bell tower have been replaced by copies for conservation purposes.

The hexagonal panel was located in the first order (east side) of the bell tower which was dedicated to the history of the liberal arts. A small boat occupies the entire width of the hexagon, dividing the space into two areas, the sky and the sea.
Seated in the boat are three men who are shown in profile. The two younger ones are rowing; the one in the foreground is clearly visible while the other is hidden behind him and merely sketched in. The third figure, an elderly man with a thick beard and hair, is seated just behind them. His age, the long tunic he wears, and the fact that he is holding scrolls, possibly nautical charts, indicate that he is the expert navigator guiding the boat. The iconography also evokes the Gospel scene of Jesus in a boat with the disciples. The background above them has been deliberately left rough as if to represent a starry sky.

Below them, incised horizontal and wavy lines represent the sea and give movement to the composition. It is interesting to the touch, being a succession of different sensations: from the rough indefiniteness of the sky, to the smoothness of the boat, to the engraved signs and the movements of the waves.

The construction of the bell tower of Santa Maria del Fiore in Florence, begun by Giotto in 1334, was a great novelty. It is an imposing tower, both elegant and slender, with a square base. It is 84.7m high and about 15m wide and is decorated with white, red and green marbles like those adorning the Cathedral.
The architecture is in the Florentine-Gothic style with rich sculptural decoration.

The first order is embellished with twenty-six hexagonal marble panels with relief carvings illustrating the history of the man’s progress in the arts and sciences: from the earliest activities corresponding to natural needs (west side), to the representation of the crafts arising from civilization (south side), up to artistic activities (east side) and intellectual activities (north side). The theme of the cycle is work, which is seen as the creative expression of a free man, and it reflects the cultural context in which it is set: a fourteenth-century city whose prosperity was built on the entrepreneurial and intellectual activities of its citizens. Thus, the idea of man fulfilling himself through work underpins not only the greatness achieved by the city of Florence, but also this Christian building that rises towards heaven and therefore towards God.