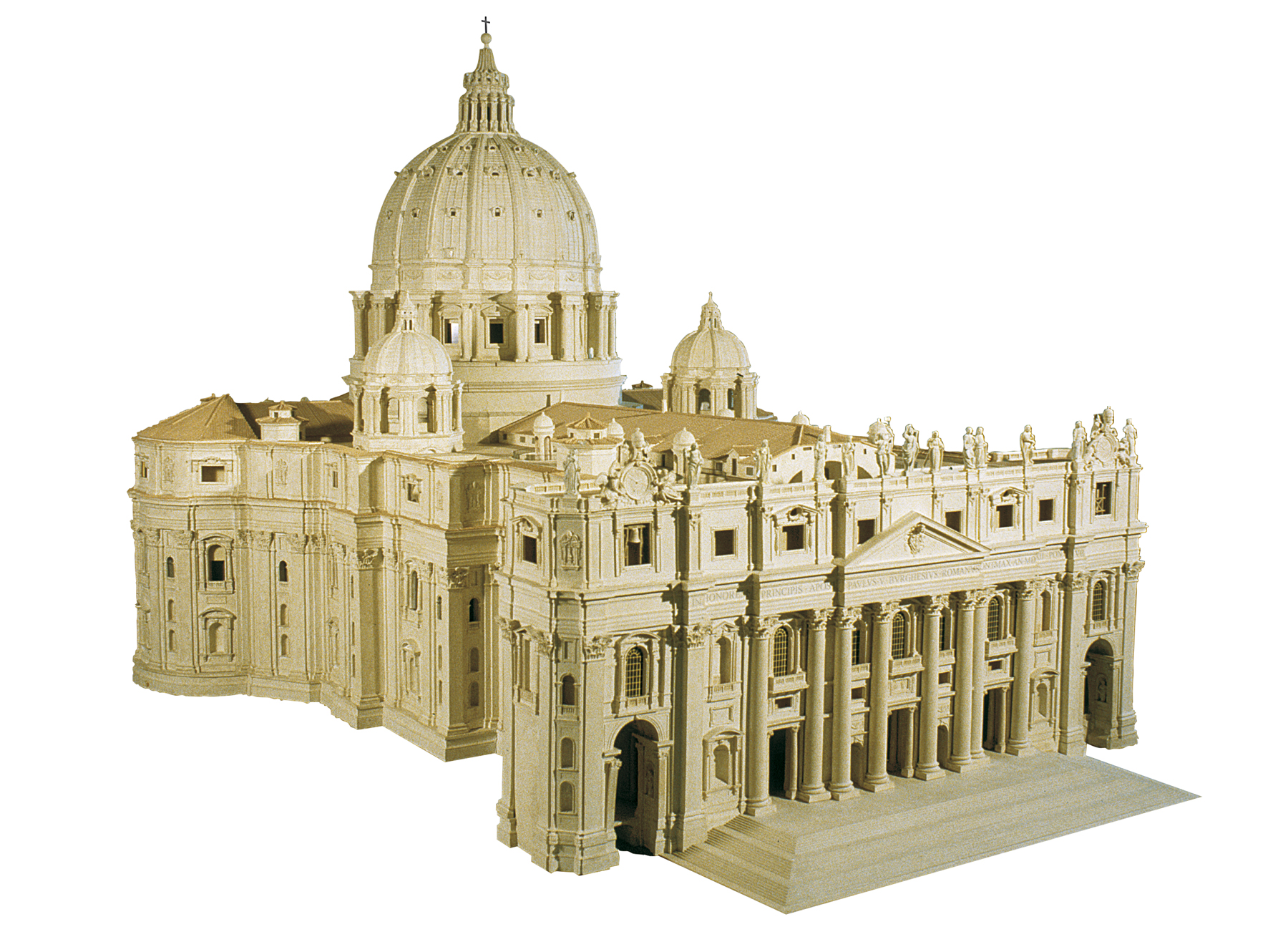 “All the arts have contributed to the decoration of this marvellous temple, which is undoubtedly the most surprising monument, not only in Rome, but in the modern world. Painting, sculpture, architecture, mosaic, the arts of casting bronzes and gilding have lavished their riches on it, and the greatest craftsmen have developed their talents there”, Gustavo Stafforello.

Our magnificent architectural model of St. Peter’s Basilica is on display in the Museo Omero’s Renaissance room. It measures about 210cm in length by 155cm in width and is composed of white resin elements mounted onto a wooden structure. It stands on a platform which can be raised or lowered, but has no removable sections so the interior cannot be explored.

The model, which reproduces the Basilica in its present form, is extremely detailed, so much so that it can be somewhat laborious for the blind visitor to explore it fully. It is, however, extremely useful for gaining an overall view of the external forms of the cathedral. It is also useful for the sighted public as it includes details that are too high up to be seen in real life, such as the numerous domes on the large terrace-like roof, which visitors to the real cathedral walk across on their way to the lantern. The model even reproduces the staircases that lead to the domes.

The grandiose composition has three storeys.
The plan is a Latin cross, where the longer arm, corresponding to the nave and aisles, is crossed at right angles by a shorter one, called the transept, towards the rear of the church. Rising over the crossing is the colossal dome designed by Michelangelo (the original is 137m high). The exterior of the Basilica is decorated with giant order Corinthian pilasters which alternate with regular geometric architectural elements, creating that balanced harmony which is such a feature of the Renaissance.

On the ground floor, aedicules, (small temples or shrines) alternate with niches (semi-circular cavities). On the first floor, wider arched windows alternate with narrower, lancet, ones while square windows are used on the second, or attic, floor. The naves and the transepts all end in semi-circular apses.

The facade, preceded by a staircase, is wider than the transept; eight giant order columns give rhythm and support an entablature. In the lower storey there are five entrance passages surmounted by five large windows. Above the central doorway is the balcony from which the election of the new Pontiff is announced.

The entablature supports a triangular tympanum which occupies the central part of the attic, and the balustrade at the very top is decorated with statues of Christ, John the Baptist and the Apostles, made by the School of Bernini. At each end of the balustrade is a Valadier clock.

The construction of the present Basilica began in 1506 under Pope Julius II and took 120 years. A succession of the greatest artists led the project, from Bramante to Michelangelo and Carlo Maderno. The new Basilica rose from the ashes of the first, which was commissioned by the Roman Emperor Constantine and built, according to tradition, over the tomb of St. Peter in approximately 320 CE.