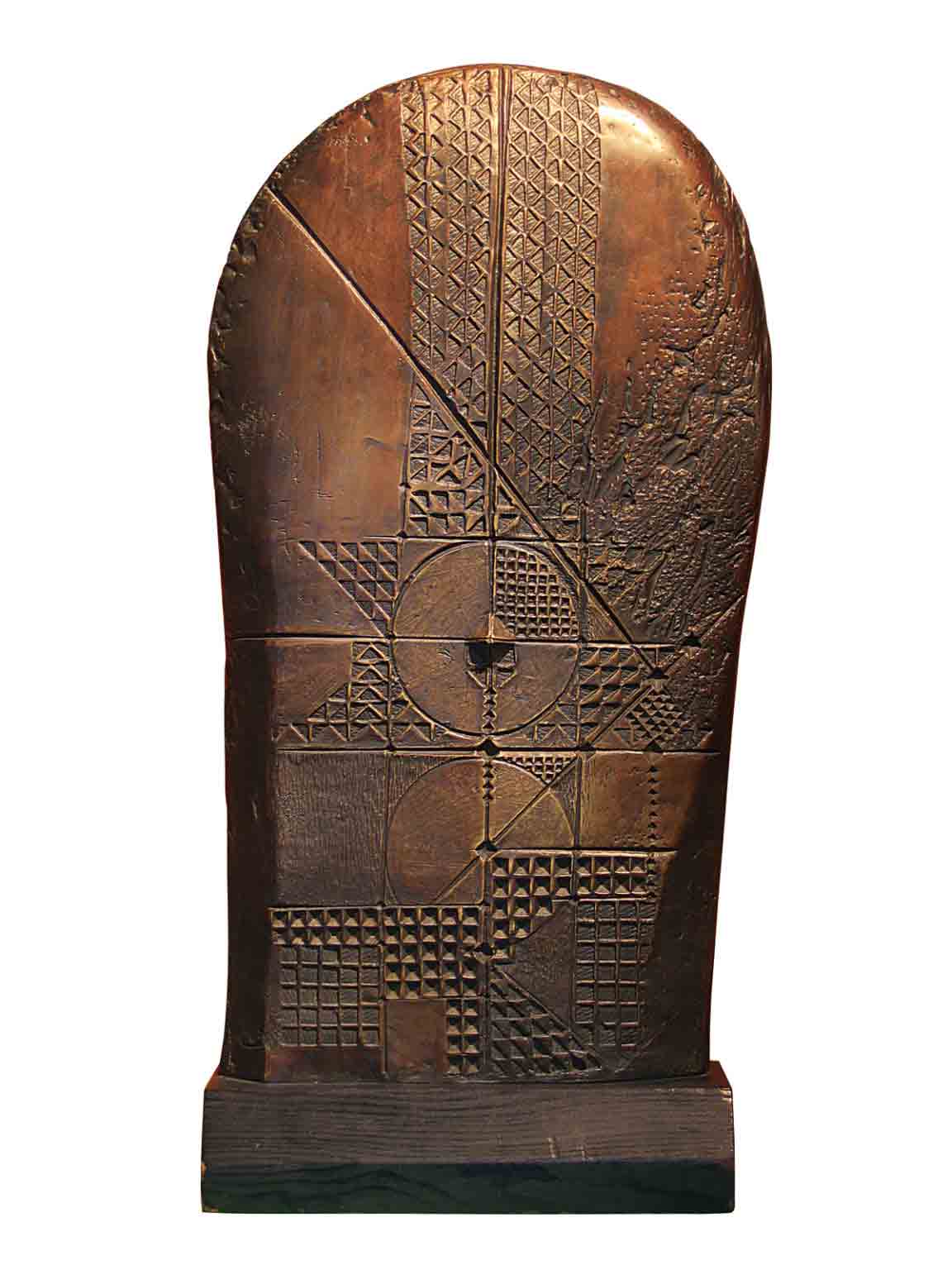 “The hand traces signs because man is probably a sign”, Aldo Grassini on Loreno Sguanci.

Segni is an abstract sculpture in patinated bronze, brown in colour, that was created by Loreno Sguanci in 1994. The work stands on a wooden base and looks like a sort of stele: a vertical slab (62cm high) with a semi-circular top, decorated with geometric patterns on both sides.

On the front, the decoration consists of lines, circles, squares, rhombuses and triangles of various sizes. They are presented in various combinations, almost always with the intent of breaking away from any hint of symmetry. In the centre, where two strongly-marked perpendicular lines intersect, there is a 1cm high pyramid – an orientation marker for our fingers.
The pyramid stands at the centre of a circle with a diameter of 8 cm. Another, identical, circle is incised immediately below it. Both are placed centrally with respect to the lattices of small triangles, squares and rhombuses that animate most of the surface. These shapes, about 1-2cm in size, are sometimes in relief, sometimes engraved and, in some cases, dug into the bronze.The upper left part of the work is almost completely plain, while the upper right part has deliberately been left unfinished and rough.

On the reverse, the artist has engraved a grid of horizontal and vertical lines with two diagonals that intersect in the centre of the work. A pattern of small rhombuses and triangles, similar to the one on the front, decorates the space beside some of the straight lines.
The various geometrical elements suggest the archaic alphabets created in Egypt and Mesopotamia, or the surface of a planet, an improbable lunar landscape, or a secret code.
The work is very interesting from a tactile point of view – your hands can perceive the sense of movement that is generated by the rhythmic alternation of the solids and voids, the smooth and rough areas which embellish the bronze surface.

The shape, seems to evoke the monoliths and obelisks erected in ancient times. The dense interweave of signs and incisions also contributes to this effect.
The signs are traces that the sculptor’s hand has left, signs of his dialogue with the material. They recall the traces that all of humanity, in its passage, generation after generation, has left on Earth, traces of individual and collective memory. In this sense, Sguanci’s works are simultaneously ancient and modern. They speak as much of the people of today as they do of those of yesterday.