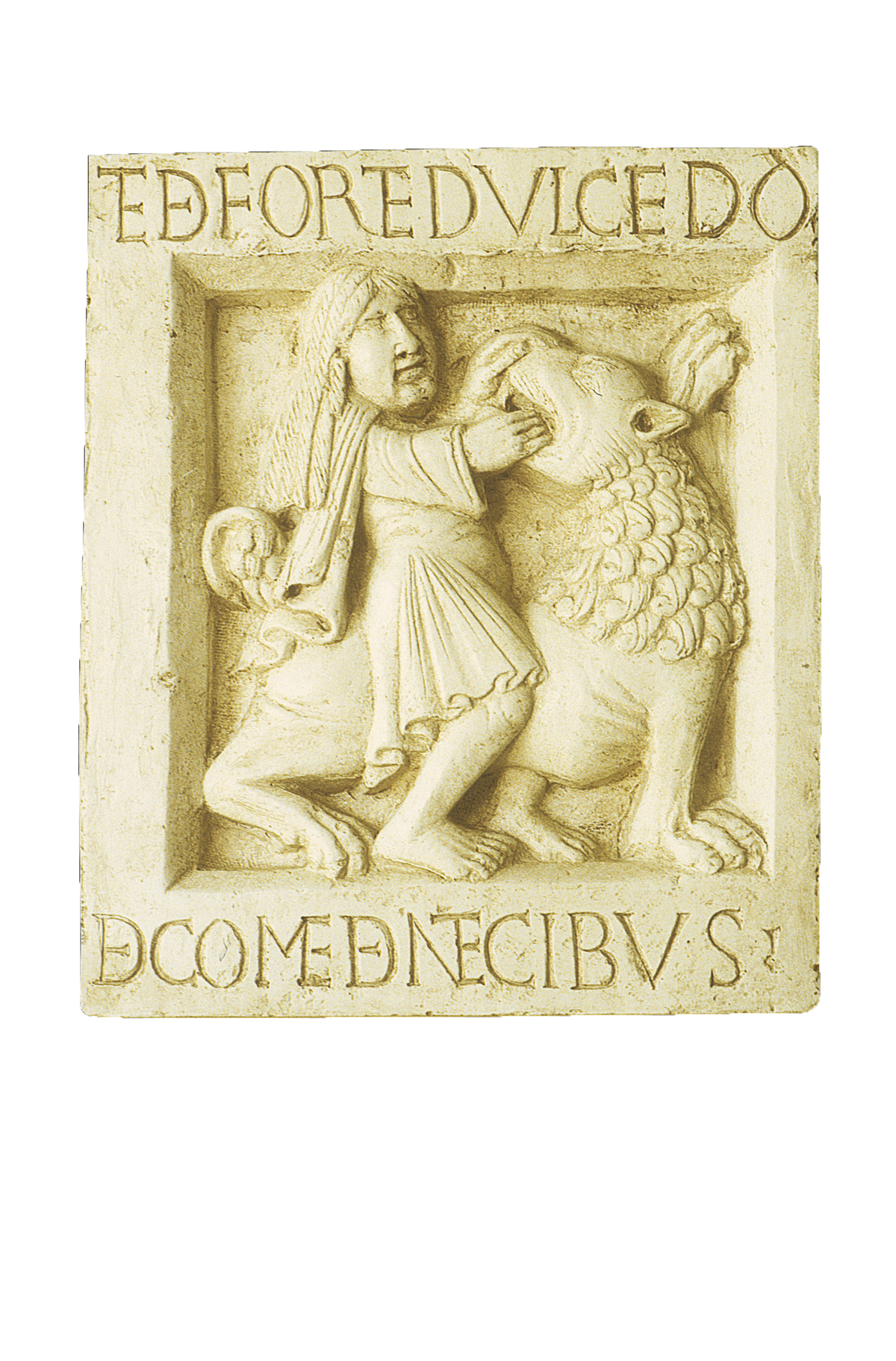 Among these is a panel about 31 cm high, on the left doorjamb, depicting Samson astride a lion. It differs from the others in the series as it is slightly squarer and does not have the round arches that usually frame the scene.
The width of the available space is entirely filled by a lion that appears to have suddenly turned its head around and opened its jaws. Samson, with his characteristic long hair, straddles the animal and occupies the entire height.

He has grasped the lion’s jaw tightly, in his fight against it. The reference is to a biblical episode, in which Samson finds that a swarm of bees have made a nest and honey in the belly of a lion that he had killed some time before.

At first sight, this panel does not seem to be relevant to the theme of the history of the abbey treated in its series. It is in fact a metaphor for the Lombard King Aistulf’s donation of the territory of Nonantola to his brother-in-law Saint Anselm: the rulers who took possession of the church’s assets, the Lombards, provided food for the monks (the donation of Aistulf). From the same dominant dynasty came forth the sweetness of the founder of the abbey. For this reason, the Biblical passage “From the strong came forth sweetness and from the devourer, food” is inscribed above and below the tile.

Further information
The origin of the abbey dates from 752 CE when Aistulf, King of the Lombards, donated some land to his brother-in-law Anselm, saint and founder of the abbey. Named after St. Sylvester, whose relics it houses, it became a Benedictine monastery and a place of hospitality and pilgrimage. This panel is on the left doorjamb, among other episodes from the history of the Abbey.

The panels are of different sizes but are all rectangular. Most of the scenes depicted are surmounted by two round arches and are orientated vertically. There are two sequences, with the earliest episodes at the bottom. The series on the right doorjamb shows stories from the childhood of Jesus, while the panels on the left illustrate episodes from the history of Nonantola Abbey, with particular reference to the figures of St. Anselm, St. Sylvester and St. Adrian.