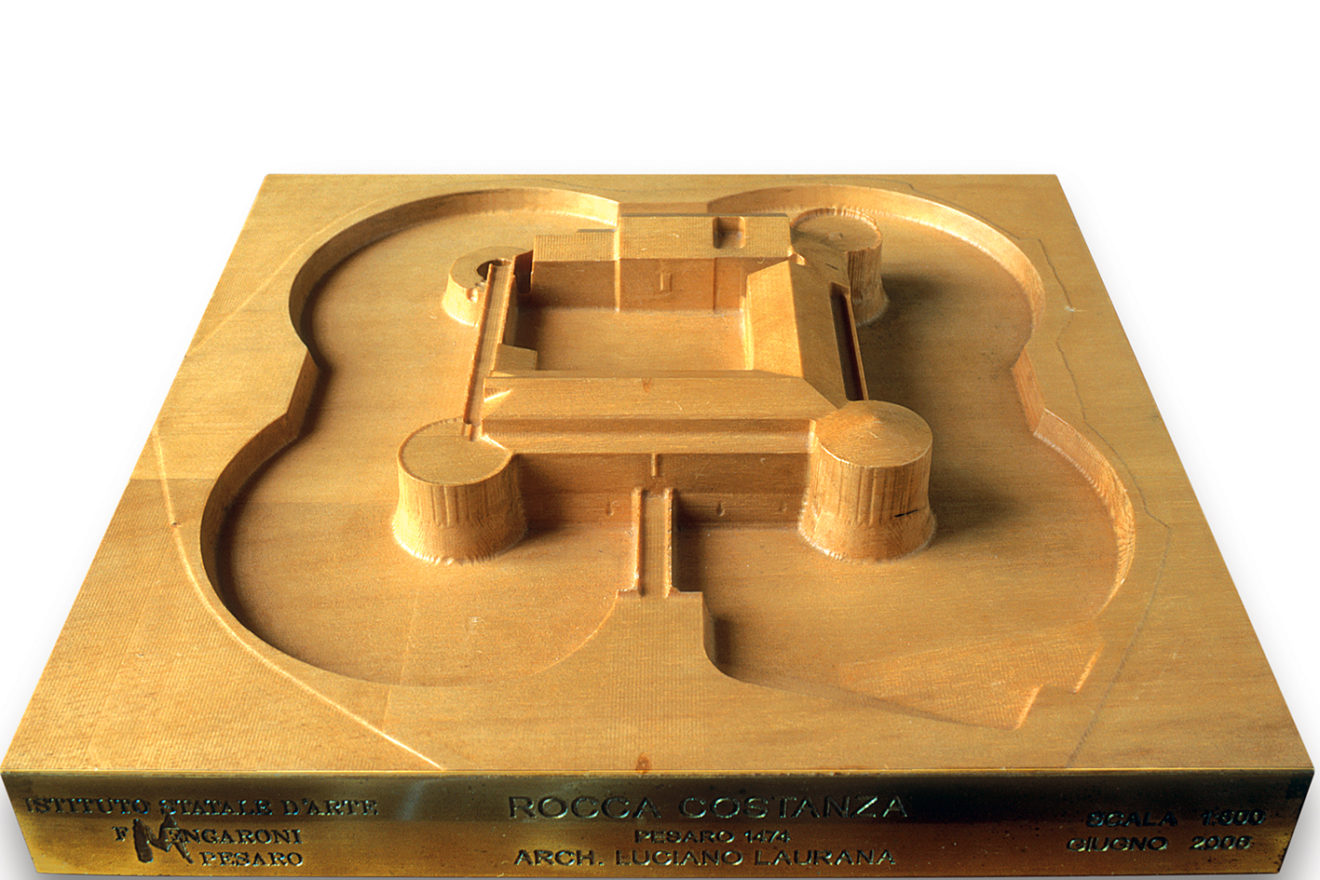 “Every great architect is – necessarily – a great poet. He must be a great original interpreter of his time, his day, his age”, Frank Lloyd Wright.

As the architect Frank Lloyd Wright wrote, every building is a child of its time. Thus the Rocca Costanza, an imposing fortification in the city of Pesaro, was designed to defend a city built on a plain and presents all the characteristic elements of 15th century military architecture: massive structure, high walls, surrounding moat, but also regularity, geometry and elegance.

The Museo Omero’s wooden volumetric model was made by the Istituto Statale d’Arte “Mengaroni” State in Pesaro as part of the “Art within Art” project.

The model sits on a 32 x 32 cm square wooden base. Only the essential components of the structure and its context are represented: a quadrilateral building, surrounded by a deep moat, with a mighty cylindrical tower placed at each of the four corners; these are connected by walls that surround and enclose an internal courtyard. All the particulars and details are deliberately omitted, so that the shape and volumes of the entire building can be perceived and understood. At the entrance of the real Rocca Costanza in Pesaro there is a larger steel architectural model of the fortress which serves the same purpose.

The Rocca di Pesaro is similar in type to the Rocca Roveresca in Senigallia and the Rocca di Rivaldino in Forlì. It owes its name to Costanzo Sforza, a military man and Signore of the city from 1473. The Sforza family also used it as a private residence.

The project, begun in 1474 by Giorgio Marchesi of Settignano, was continued by the famous Dalmatian architect Luciano Laurana, and then by Cherubino di Giovanni da Milano, who completed the construction in 1483.
Over the centuries, the building was significantly modified and restored several times. After belonging to the Sforzas, it was taken over by Della Rovere family before becoming part of the domain of the Papal States. Its use changed too: initially a military fortress, it later accommodated papal troops and then was used a prison from 1864 to 1989.