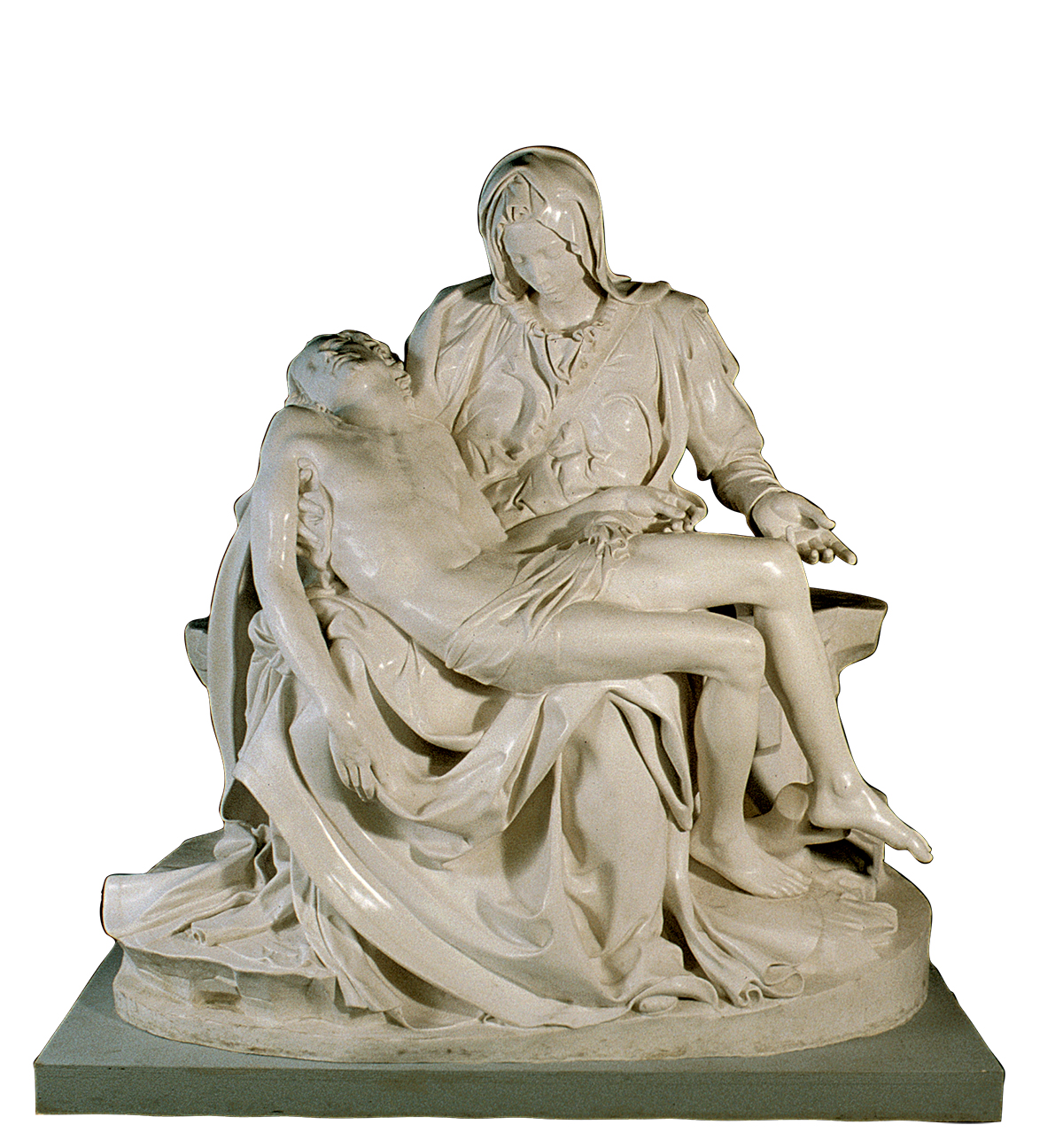 The “Pietà of St Peter’s Basilica, which was commissioned by the French Cardinal Jean Bilhères de Lagraulas for his own tomb, is perhaps Michelangelo’s most famous work. He worked on the statue between 1497 and 1499, while he was still in his early twenties. It is a life-size sculptural group in statuary marble from Carrara, (174cm high and 195cm wide). The Museo Omero has a cast from a true copy, which was made using resin and marble dust by the CineArs studios in Rome. Our copy feels more similar to the original (and is more pleasant to touch) than the usual, plaster, casts, thanks to the use of powdered marble and the special manufacturing process.

The work has the form of a pyramid: Mary is seated on a wide rock that might refer to Calvary, holding the lifeless body of Christ, her son, on her knees. The Virgin wears a veil that covers her head and a loose-fitting dress with voluminous folds that reaches to the ground. Her right arm supports her son, her fingers visible at his armpit, while her left hand is turned palm upwards, in a gesture that represents acceptance of the divine will.

Mary’s, very young, face is turned towards Jesus and her expression is composed even in suffering rather than ravaged by pain. Christ is stretched out on his mother’s lap. His right arm hangs down, his head with its long dishevelled hair has fallen backwards and his eyes are closed. His body is smooth and naked, except for a cloth tied at his waist. The stigmata can be perceived on his hands and feet but, apart from these, there is no other sign of suffering so that Christ appears asleep rather than dead.

In this work, Michelangelo reworks the iconography of the Northern European Pietàs in terms of classical beauty: the Virgin is no longer portrayed with an agonised wrinkled face nor Christ with a thin stiff body covered with bleeding wounds. The artist has abandoned the idea of the Pietà as an explicit representation of pain and, more subtly, evokes Mary’s participation in the Passion and her acceptance of the death of her son as part of the divine will.

The sculpture is also striking for the sheer technical skill of the very young sculptor. The anatomy of Christ’s body is portrayed in great detail and the marble has been treated differently according to the surface being represented: rough and opaque for the rock, smooth for the skin of the characters. The artist also took great pains in rendering the drapery of Mary’s dress on which, at chest height, he has carved: MICHELANGELUS BONAROTUS FLORENT FACEBAT. This is the only work that Michelangelo actually signed, perhaps to disprove the rumours claiming that it was impossible for such a young sculptor to have created so perfect a work.