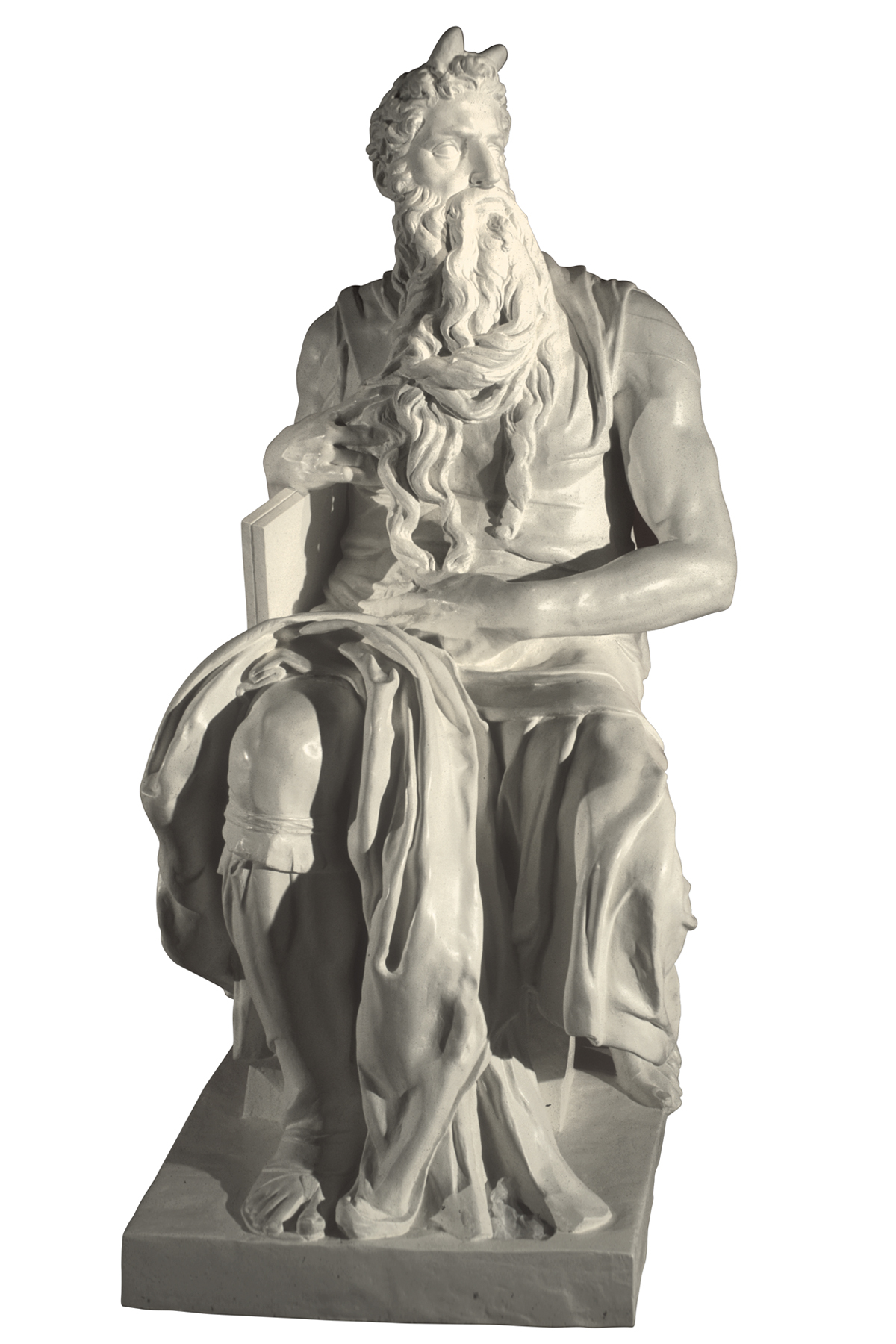 “This statue is sufficient by itself to honour the tomb of Pope Julius”.

Thus Michelangelo writes of “Mosè”, a colossal marble statue destined to be part of the funeral monument to Pope Julius II which was eventually constructed in the church of San Pietro in Vincoli although he was actually buried in St Peter’s Basilica.

The sculptor received the commission for the enormous sculptural and architectural ensemble in 1505, when he was in his early thirties, but it did not start to appear until 1542, after decades of work and revisions. What should have represented a magnificent proof of Michelangelo’s genius became instead the “tragedy of the burial”, as he himself called it.

The Museo Omero has a copy of a true cast taken from the original sculpture which was actually one of the first of the forty envisaged in the original project, to be completed. It was also the only one to be used in the final monument, where it is located in the centre of the lower level, surrounded by six other statues.

Moses is seated with his left leg bent backwards, with just the toe of his foot touching the ground. His left hand is resting in his lap while his right arm holds the Tablets of the Law which seem to be about to slip. His right hand is twisting his long beard. Vasari wrote that it is carved with such perfection as to appear more “the work of a brush than a chisel”.

The head, initially frontal, has been masterfully turned to the left to give dynamism to the work. The forehead is deeply lined, the mouth barely perceptible between the beard and moustache. He is frowning, as if he were staring at something that had angered him: a “terrible” face. Protruding from his thick wavy hair there are two small cones that resemble horns.
According to one hypothesis, the sculpture represents Moses after he descended from Mount Sinai and finding the Jews intent on venerating the golden calf, indignantly punished them. What look like small horns on Moses’ head are actually rays of light expressing divine vision. “Mosè” was in fact the statue referred to in the famous anecdote about Michelangelo who, seeing the perfection of his work, struck the figure’s knee with a hammer, exclaiming: “why won’t you speak?”

The work was purchased thanks to a contribution from Arcus Spa.

The Path beyond the Visible
Following a request from the Soprintendenza Speciale of Rome, an information point was created for the church of San Pietro in Vincoli by the Museo Omero and La Sapienza University’s Engineering Dept’s Digilab. It features scale models of the tomb and the statue of Moses as well as a life-size copy of his face. There are also information panels in text and Braille with QR code for audio content.
The ‘Percorso oltre il visibile’ was inaugurated in 2018 after the restoration work on the monument was completed. This included a virtual reopening of the now walled-up left window of the church to simulate the original natural lighting.