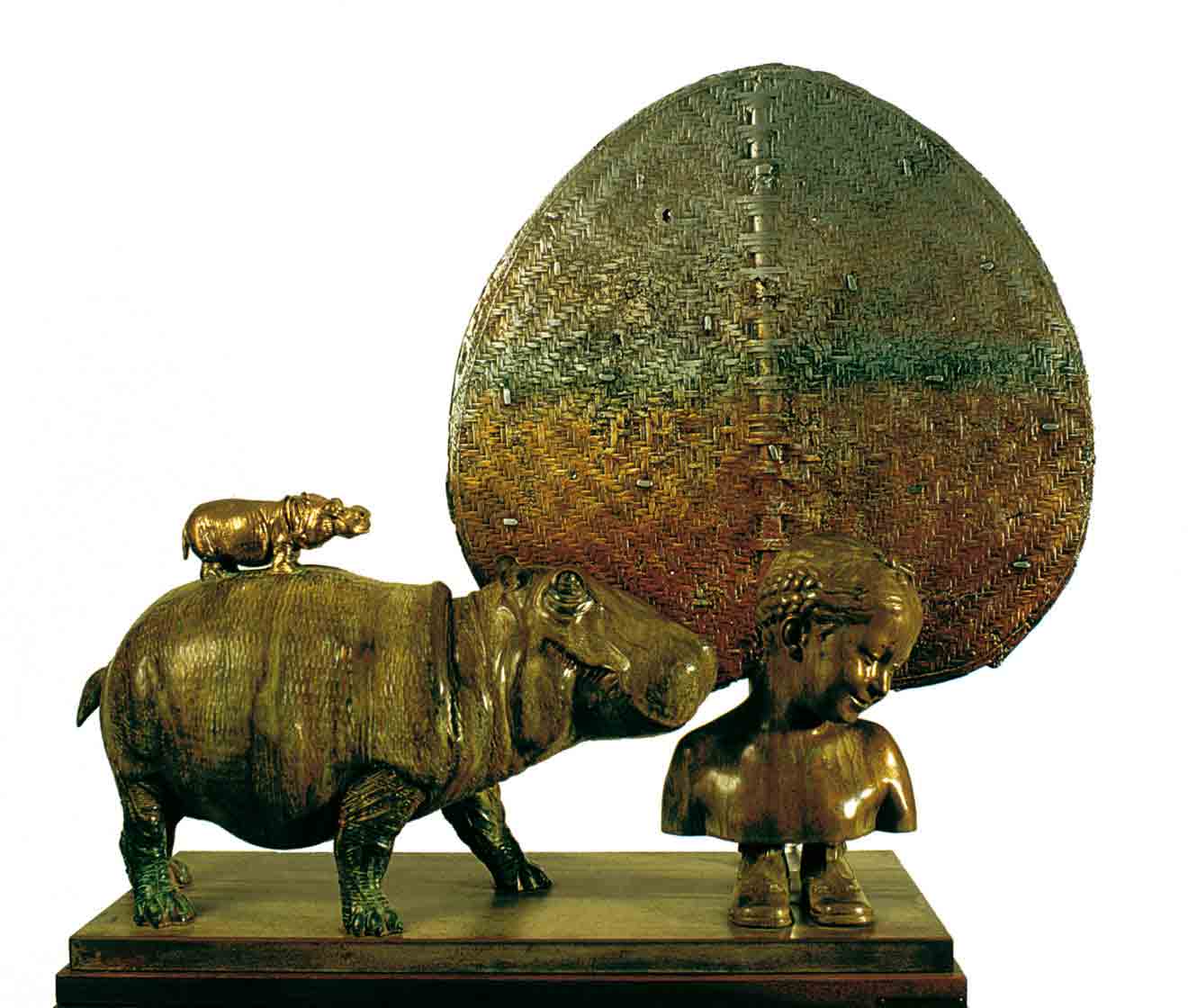 This work is a fine example of Valeriano Trubbiani’s art. Born in Macerata in 1937, he was one of the greatest Italian sculptors.

His imagination soon turned towards an inner “bestial world”, where animals, for the most part, take on genetic mutations dictated by human vices and virtues. In these hypothetical and grotesque spaces, Trubbiani builds impossible cities populated by a “bestiary” forced to “act out” unnatural roles as if in a theatre of the absurd where the paradoxical conditions are amplified references to everyday cynicism and irony through which he filters it.

The scene that appears before us in this sculpture is also steeped in that disturbing sense of expectation which is typical of his work. Nothing appears to be happening, but it is the choice of the characters he has collected and assembled that trigger deep feelings, thoughts and reflections.

The work depicts a bulky female hippopotamus, carrying her shiny gilt-bronze calf on her rump. The two seem to be advancing affectionately towards the bust of a little girl. Her hair is gathered in a braid that frames her delicate, well-proportioned, smiling face and her puffy cheeks show how young she is. Iconographically, she belongs to the late nineteenth century. However, the bust is supported by a pair of modern, typical children’s shoes that evoke a strong nostalgic appeal in the viewer, as they are familiar cherished objects even if distant in time.

The unlikely juxtaposition of a mother hippo and a child is softened by the sensation of motherhood that floats all around the composition, and which is the true bond between the human, animal and natural worlds. The bewildered feelings induced by the fact that the various creatures are not depicted to scale, do not stop us perceiving the tenderness and the involvement, but also the affectionate embarrassment, between the two protagonists. The choice of deliberately disproportionate and unsettling dimensions does not prevent the creation of an intimate, delicate, slightly embarrassed atmosphere enveloping the group of figures who are protected by the emblematic presence of the vegetal world placed behind them. In a similar way, a later (and the most famous) work from the Mater Amabilis series, in Piazza Pertini, Ancona, is set among trees.

Behind the figures is a large, perfectly frontal, leaf-shaped ceremonial fan whose meticulously-worked, woven surface is interspersed with protruding silvery hooks.

The statue is made of bronze and aluminium and has been treated with patinations that give the metals the appearance of onyx or banded agate.