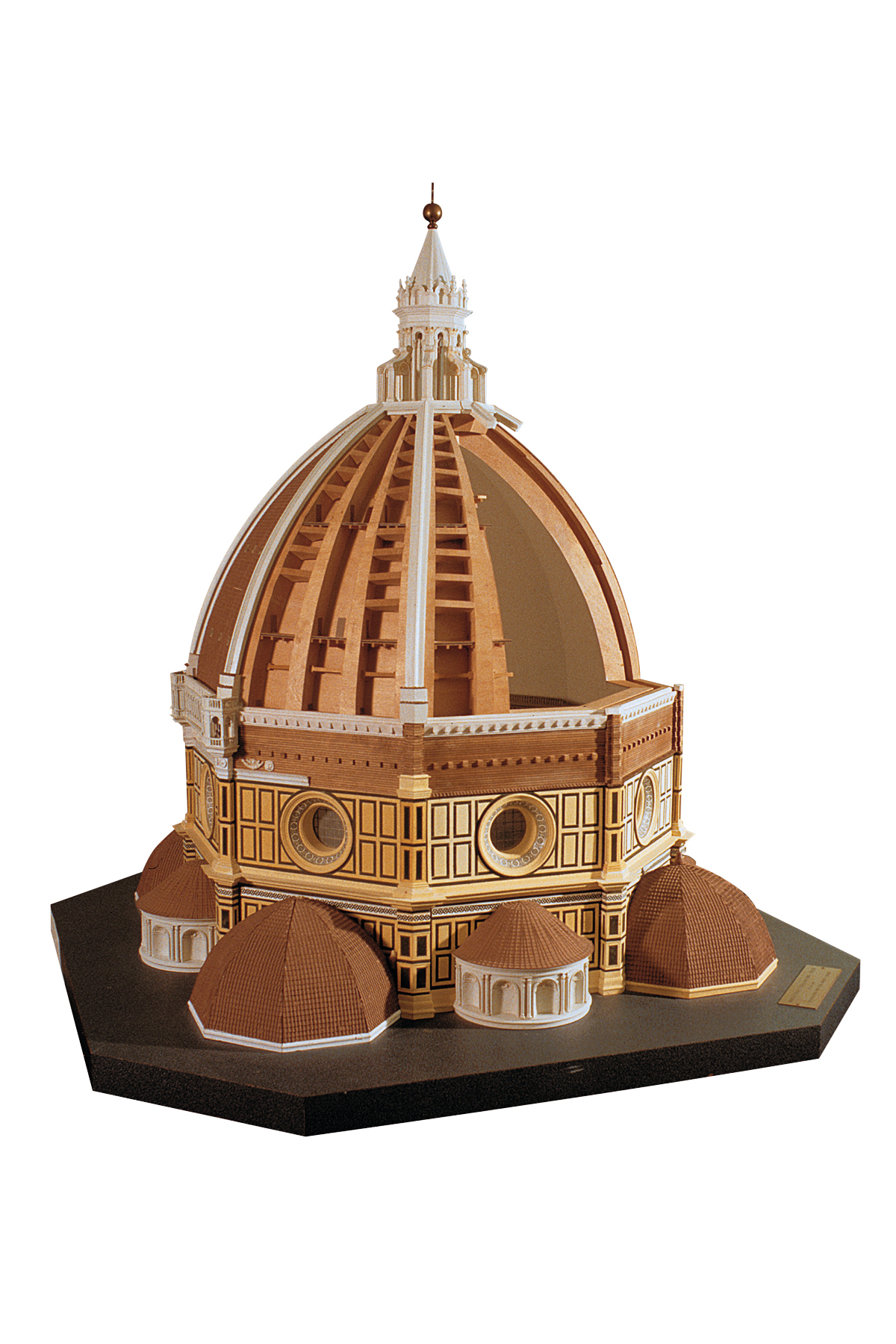 “… a structure so large, so high above the skies, wide enough to cover all the peoples of Tuscany with its shadow…”.
Leon Battista Alberti, De pictura

The architectural model, 80 cm in diameter and 122 cm high, recreates the dome built by Filippo Brunelleschi for the Cathedral of Santa Maria del Fiore in Florence between 1420 and 1434. It was a brilliant and unprecedented idea considering its enormous size, 45.5m at its base, and the resultant construction problems.

The model is made of wood and resins. A section of the dome has been left open, allowing the interior to be explored by touch. Furthermore, rather like an onion, the exterior layer has been removed from an adjoining area to expose the ingenious and innovative construction method.

Small domes are set against the base of the octagonal drum, each of which has a centrally-placed circular window, oculus, above it. The drum is decorated with geometrical motifs, a succession of vertical green rectangles, mostly in outline but those at the corners are solid green; the background is the yellowish-white marble used on the entire cathedral.

The decoration on the model reproduces the original. The entire cathedral is an alternation of geometries created by the colours of the various marbles (Carrara white, green from Prato, red from Maremma) and the terracotta red of the tiles on all the domes. The slender dome is supported by the drum and it is also divided into eight segments. Some of these segments are covered with a knurled texture representing the bricks which were laid in a herringbone pattern, one of the great novelties of the building.

In one part, it is possible to touch the smooth framework underlying the bricks. The dome is actually a double-shell structure, i.e. two distinct parallel ogival domes. The inner one is more robust and the outer, protective, one is thinner. The domes are connected to each other by a skeleton, composed of a series of parallel horizontal rings and twenty-four ribs, powerful vertical parabolas that support the dome and join together at the tip. Eight of these ribs stand at the angles, defining the eight segments of the dome, and are visible externally; in the actual cathedral they are made of white marble. Each section also has two minor ribs. In this way, Brunelleschi created a dome that was self-supporting, not only when completed, but throughout the construction.

At the top of the dome is a lantern in the shape of an octagonal prism with a conical roof. This name is given to the architectural structure, similar to a small temple, whose purpose is to allow light into the cathedral through the windows in its vertical walls. The roof of the lantern is crowned with a ball surmounted by a cross, symbol of the universality of Christianity. The original gilded copper ball, the work of Andrea del Verrocchio, was placed there in 1466: it contains sacred relics.

The dome, symbol of the city of Florence, soars above the heart of the city. The church of Santa Maria del Fiore is the third largest church in the world (after San Pietro in Rome and St Paul’s in London) and was the largest in Europe at the time of its completion in the 15th century. It is 153m long, 90m wide at the crossing and 90m high from the floor to the opening of the lantern. The interior of the dome was decorated with frescoes representing the Last Judgment, by Giorgio Vasari and Federico Zuccari between 1572 and 1579.