“The Memory of Antiquity, D’après l’Antique” exhibition from the Louvre Museum

Posted in Exhibitions on 1 March 2005 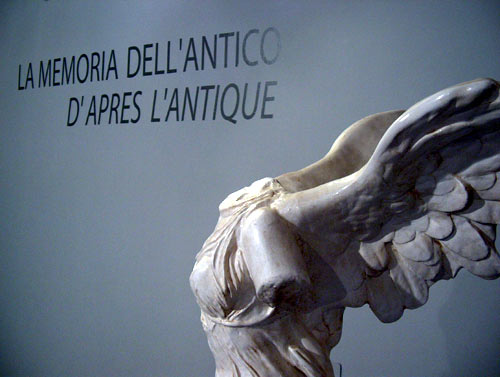 From the world of ancient sculpture to its copies and imitations.
From 12th March to 26th June 2005, Mole Vanivitelliana, Ancona.

The search for antiquity has always been the driving force behind the revival of beauty and culture; in France and Italy, the common memory of a dreamed-of antiquity has impelled art and artists to study, re-interpret and draw inspiration from antiquity. “The Memory of Antiquity. D'après l'Antique” (40 works, mostly sculptures, arranged in a fascinating and unusual exhibition in the Vanvitelli rooms), begins with famous examples of Greek and Roman sculpture and aims to demonstrate how antiquity was not only an absolute bench mark for artists, but also delighted the public, who demanded an ever-increasing availabilty of ancient works. By bringing together some of the masterpieces from the Louvre and other works from the collections of the Museo Omero and the Archaeological Heritage Office of the Marches, this exhibition highlights the ways and means through which the masterpieces of antiquity were copied, engraved, reproduced, imitated, quoted and diffused, and how they were transformed, and occasionally even deformed, under the gaze of their admirers.

On display are not only copies but also casts taken directly from originals which recount the memory and the spread of this art: from the “Winged Victory of Samothrace”, to the “Venud di Milo”, in their various reproductions, from the bronze “Spinario”, to the “Marcus Aurelius” of the Capitoline Hill (model for capitals and royal statues), to the “Borghese Gladiator” where the gigantic dynamic image by Agasia, becomes a delightful statuette, reworked in bronze by collectors, or modelled in terracotta by Nicolas Coustou, sculptor to Louis XIV. The head of the “Laocoon”, separated from its context, and the austere face of the “pseudo-Seneca”, become facially expressive heads, touched up by the sculptors of the seventeenth century.

The two museums: sculpture is the only form of art that can be perceived through touch and which can make the enjoyment of art possible to the visually handicapped. At the same time, casts have always been made for teaching art and for the delight of collectors. The sculpture-cast symbiosis becomes the only objective method of spreading knowledge of art among the non-sighted. The tactile gallery of the Louvre, the first of its kind in a French museum, and the Museo Omero, the first and only state tactile museum in Italy, have pioneered haptic mediation and aim, through this exhibition, to underline their common project: to make the artistic heritage available to the visually handicapped public, while offering the general public an additional and more profound way of reading the works.

Scientific Committee: The curators of the exhibition are Geneviève Bresc-Bautier and Cyrille Gouyette.
The Scientific committee is made up of Geneviève Bresc-Bautier, Giuliano de Marinis, Massimo Di Matteo, Roberto Farroni, Cyrille Gouyette, Aldo Grassini.
The exhibition was arranged by the Louvre Museum, Paris and the State Tactile Museo Omero, Ancona, in collaboration with the Archaeological Heritage Office of the Marches and the Polytechnic University of the Marches; with the patronage of the Heritage and Culture Ministry, of the Ministry of Education, the Universities and Research, of the Marches Region, of the Province of Ancona and of Ancona City Council.

The continuity of art in the evolution of sculpture.
The exhibition at the Mole also includes two sections dedicated to contemporary art: “Homage to Vittorio Morelli” (from 12th March to 17th April) curated by Massimo Di Matteo and “Trama di legni” (from 23rd April to 26th June) dedicated to Loreno Sguanci and curated by Leo Strozzieri. Again highlighting the line of the development and the continuity of art through the evolution of sculpture.

Entrance fee: full price €2.00; students, groups (of at least 10) €1.50; family ticket €5.00; schools € 1.00 per pupil, entrance is free to the disabled and their helpers, and to children aged 6 and under. Guided tours for a minimum of 10 people can be booked at an additional cost of €1.00 to the entrance fee. Art workshops for schools are available at an additional cost of €1.50 per pupil, teachers free.