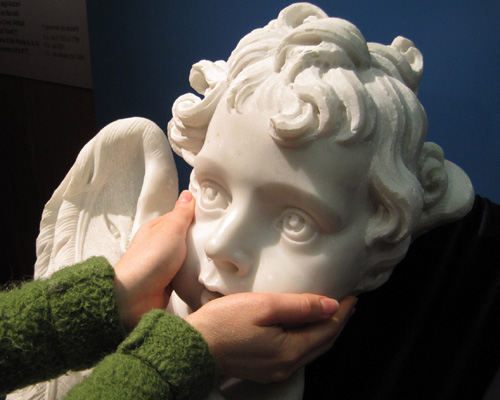 Aimed at: primary and secondary schools.

The pupils will be accompanied to the Architectural Models Room, where they will be invited to sit on the floor.
The workshop begins with an introduction to the Museo and a presentation of the group / class. At this point, the “sense awakening game” begins : the children put on cotton or latex gloves, and work on heightening their sensitivity. When they are ready, the pupils will be accompanied to the Greek Room: here they will be blindfolded and accompanied to the room where the “Toccare gli angeli” exhibition is on show. Sitting comfortably on the floor, they will be involved in a multi-sensory experience: blindfolded, they will listen to music, taste foods, smell perfume essence, touch one of the works on show (with gloves naturally).

Once upon a time… Gioacchino Varlè (Rome, 1731 -Ancona, 1806) … loved working with marble, decorating the insides of churches, but also large public buildings and private houses … he loved to carve angels and cherubs because “the angel makes the stone smile”.
Reflections on the theme of angels; exchange ideas, concepts, metaphors.
At this point, the pupils will be ready for the workshop activity.

Angels are messengers… they often send invisible messages…
Let’s try to construct a tactile message… but one which also has an Odour, a Taste, a Sound.
Choose who it will be for.
Decide what it will say.
Now transform your message into materials, in something you can touch, smell, taste or even hear… There is only one rule… the message must be “readable” with eyes closed.

Cherubs are immaterial, light beings: their sweet graceful forms are made vivid by their light, timeless movements, that follow non-physical laws.
The cherub’s flight is that of the butterfly, the humming bird, the feather that flutters candidly in the celestial air.
If we take as a starting point the French philospher Jean Guitton’s phrase, “the angel makes the stone smile”, we can also see that the angel can confer life to inert material, make it rise to the sky.
Try to imagine the flight of an angel.
Pupils will invent sentences that are rich in adjectives and similes (as light and harmonious as a cloud…), to describe how a cherub might fly.
Next, pupils will move on from the literary model to the form of the object: these feelings must be transposed or translated into material form.
Some Mobiles by Calder are on show in the workshop. The beauty and lightness of their structures/skeletons will inspire pupils to construct a light structure covered with equally light (and sounding) materials, which should be able to fly for some seconds when thrown in the air. The sound emitted by these assembled objects is important too, in narrating the course of the flight… From which, angels whose flight alludes to the world of ideas, where appearance is mere illusion, as changing as the reflections of the rainbow.
But look out! … only the most skilful and inspired pupils will manage to make their angels fly!