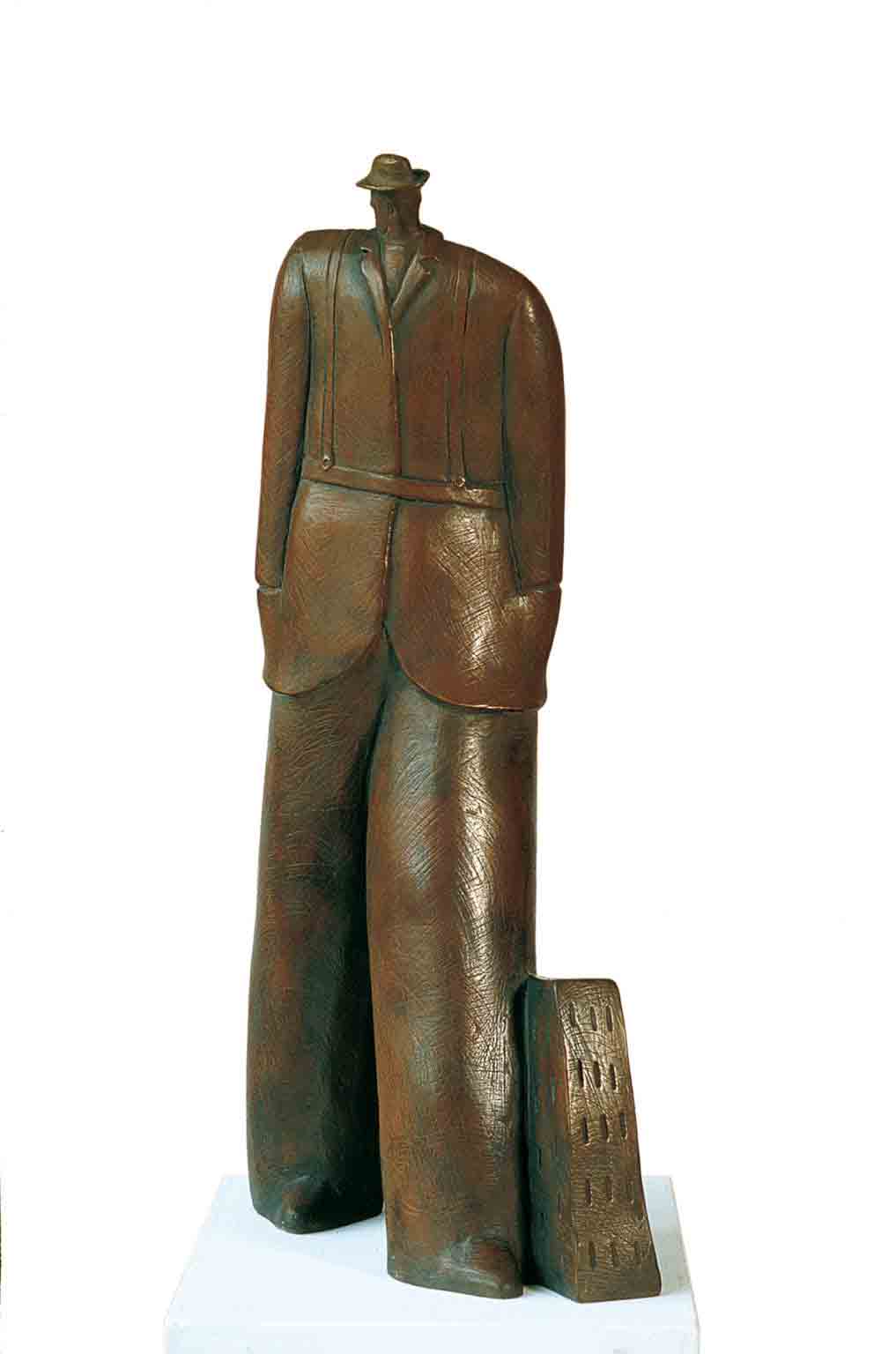 Sergio Zanni was born in Ferrara in 1942. Like others of his age-group and origins, his artistic quest led him to become a convinced devotee of a strongly symbolistic and surrealistic representational art. Fundamental to this evolution was the study of materials and, in particular, of earths. Adriano Avanzolini, Franco Marchisio, Nicola Zamboni and indeed, Sergio Zanni have all chosen to work in earthenware. Zanni’s skill is such that he can draw from the clay a mirror of his deepest feelings and can catalyse his thoughts, so that reliefs and modulations become the projections of a mind which is populated by a small army of strange characters.

Men have small heads, or heads replaced by objects such as telescopes, all of them small. Is this a way of mocking the activity of thinking? It seems more like an attempt at escapism. But it often seems that bitterness leads him to invent men, with or without heads, who make us laugh, but are intent on watching the world from behind their overcoat lapels, which appear to be an outpost on life.

The “Pittore sconosciuto” (Unknown Painter) of this work is shown in the act of walking with one leg stepping forward, while he is looking backwards over his right shoulder. His small face is almost completely hidden by his hat but we can clearly see his straight, stylized nose and his strongly marked chin which is partially hidden by his jacket collar. He is wearing a high-necked waistcoat under his jacket which has rounded corners at the lower edges and no buttons.

He has a tiny rucksack on his back which is attached to his belt by a strong pair of braces. His long trousers cover all but the rounded toes of his shoes. He is walking with his hands in his pockets, which strengthens the sensation of his inability to communicate and his melancholy.

The impression of a traveller who has just set off and is perhaps already regretting it. The study of architecture is essential for Zanni in the creation of his dreamlike characters. He uses disproportion creatively to draw attention to details, in this case the head, which is a microcosm in this sculpture, a focal point which inevitably attracts the eye, as do the excessively large, heavy legs. The effect of imbalance is further increased by placing a stylized, distorted, multi-storey building next to the man’s left leg, the windows being indicated by light cuts in the surface of the bronze. The unknown painter is a man who has to leave a place, maybe because it is too small and suffocating for him, but who cannot leave without feeling a human nostalgia, the fear that is part of every journey.

The bronze surface has been worked with small scratches which underline the movement of the composition on the legs as on the arms, and give the work a surface patina like that of a statue carved from wood.