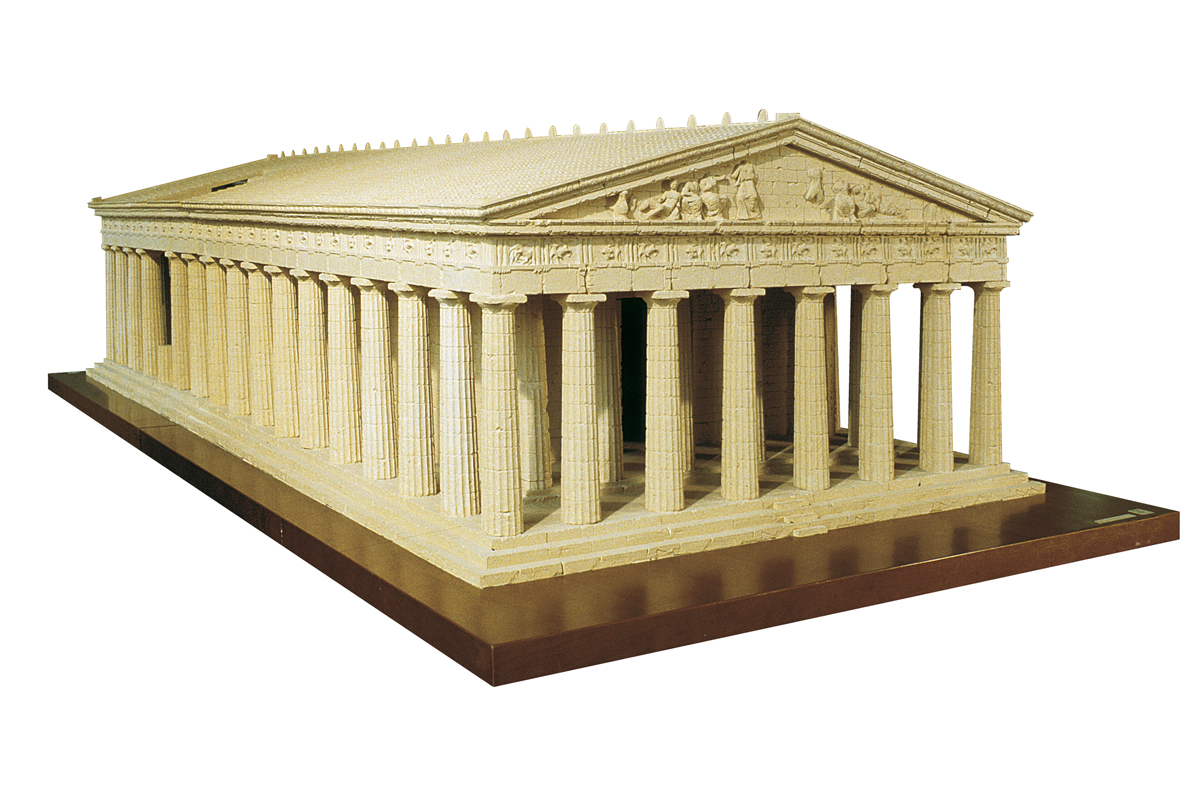 “The Parthenon enshrines a harmonious synthesis of utility, solidity and pleasantness”, Vitruvius by “De Architectura”.

The detailed model of the Parthenon is about 2.5m long and is made of wood, plaster and resin. It reconstructs the temple in its entirety, as it would have originally been seen by the Athenians. Designed by Phidias, it is considered to be “the perfect temple”. Rectangular in shape, standing on a platform with three steps, it was surrounded by Doric columns – eight on the short sides and seventeen on the long ones. Home of the goddess Athena, protector of the city of Athens, the temple is located at top of the Acropolis, the highest part of the city.

The model is fitted with wheels and can be opened up into two parts so that the interior can be explored. The division is just after the middle, between the cella (the sacred place where the sacred statue of the Goddess, the naos, was kept), and the room behind the cella (the opisthodomos) where the treasure and the sacred furnishings were kept. Two openings in the roof allow you to touch both the internal colonnade that surrounded the cella and a reconstruction of the statue of the goddess Athena, made by Phidias and now lost. A bas-relief frieze, in the Ionic style, runs around the exterior of the cella walls and depicts the Panathenaic procession. The statue of Athena shows the standing goddess, wearing a helmet and breastplate and equipped with a spear and a shield.

On the external perimeter, above the colonnade, there is an entablature with a Doric frieze, a decoration where small rectangles with images in high relief (metopes) alternate with vertical grooves (triglyphs). At each end, there is a pediment above the entablature. These are decorated with statues, some of which are nor very perceptible to the touch. The east pediment shows the birth of Athena from the head of Zeus while the west depicts the clash between Athena and Poseidon for the control of Attica.

The Parthenon was commissioned by Pericles in 445 BCE and built by the architects Iktinos and Callicrates, under the supervision of Phidias. The name Parthenon derives from “parthenos” (virgin), one of the attributes of Athena. At the end of the 6th century CE, it was transformed into a church then, in 1456, into a mosque, while in 1687 it was partially destroyed by Venetian cannon fire in a war against the Ottoman Empire. Moreover, many marble carvings were removed by Lord Elgin, the British ambassador, in the first half of the 19th century. They are on display in the British Museum.

Despite the damage it has suffered, the Parthenon’s charm and fame has remained intact. The undisputed symbol of Athens, the Parthenon still watches over the city from the heights of the Acropolis.