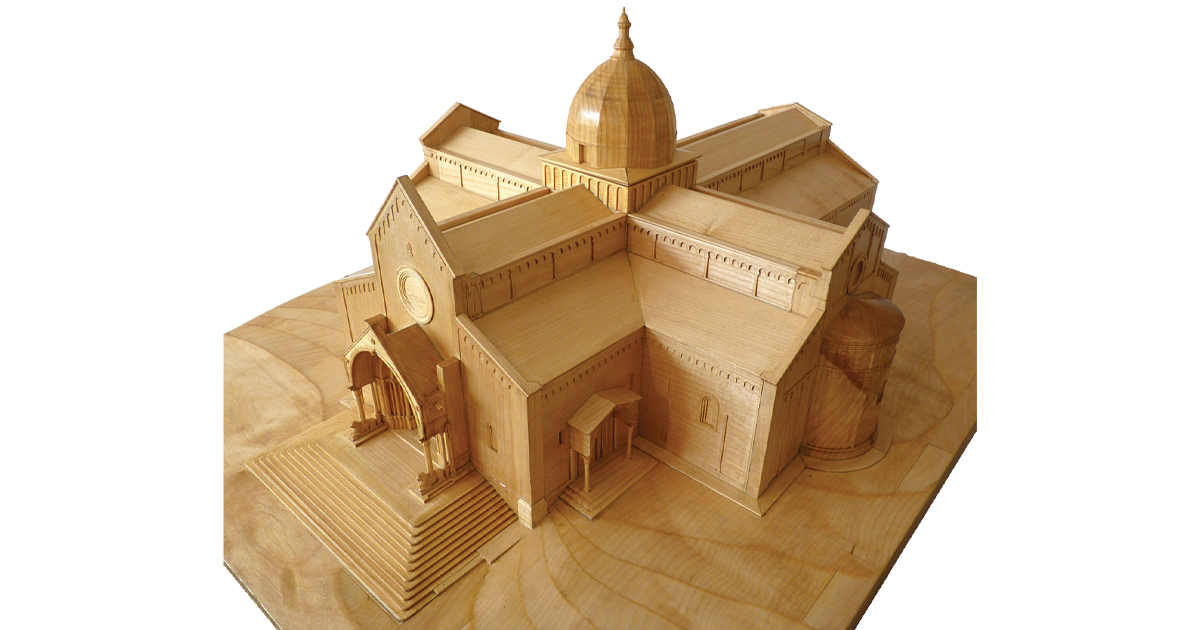 The present church reflects the stylistic changes which occurred during its construction (from the eleventh to the thirteenth centuries), being a Romanesque structure built to a Greek Cross plan, with Byzantine influence and Gothic elements. This harmonious organism stands on the remains of a third – second century BC, Greek temple of the Italic type which was probably dedicated to Aphrodite/Venus Euplea, protectress of navigators and ships. In the sixth century AD, a basilica with three aisles, dedicated to St. Lawrence, was built on its foundations and at the end of the ninth century, the presbytery was heightened and the apse completed. In 1017, the bodies of Saints Marcellinus and Cyriac were brought to the church. Between the end of the eleventh century and the first half of the twelfth, the church was enlarged and its ground plan was altered to a Greek Cross (arms equally long), while the doorway and the prothyron were added in the thirteenth century. At some point between the thirteenth and the fourteenth centuries, the dedication of the church was changed from St. Lawrence to St Cyriac, bishop and martyr, patron saint of the Maritime Republic.

The front is tripartite (in three sections) with a wide staircase leading up to the round-arched Romanesque-Gothic prothyron which is supported by four columns. Two of these rest on red, Verona granite lions while the other two, which were added by Vanvitelli, stand on plinths. There are relief carvings of the symbols of the Evangelists under the arch, two at each side. The prothyron protects the earlier, red and white Cònero stone portal, which is also Romanesque-Gothic and attributed by some to Giorgio of Como (1228). It is deeply splayed and consists of a series of receding pairs of columns bearing pointed arches and the tympanum is decorated with busts of saints and animals. There are single lancet windows on each side of the prothyron and a large rose window above it. A decorative band of small hanging arches runs along the top of the facade and continues round the sides and rear of the building.

The long side arms are also tripartite and each has a tall apse in the centre, decorated with semi-columns and two bands of hanging arches (the lower one at the apse on the left arm is enriched with human and animal heads). On the right side of the front arm there is a second, very simple, Romanesque doorway and prothyron. The rear arm, very plain in form, is squared off at the end. Where the arms cross, a low, twelve-sided drum resting on a square base supports a soaring thirteenth-century dome, believed to have been reconstructed by Margaritone of Arezzo (1270). To the right of the church, standing alone, is the squat bell tower, first mentioned in 1314. Inside the centrally-planned cathedral, there are three aisles which are separated by Roman columns with Byzantine capitals. The altars in the transepts are raised above crypts, while the twelve-sided ribbed dome rises in the centre of the church. Two bands of red Verona marble in the floor mark the positions of the long sides of the pagan temple and the Early Christian basilica. The central nave of each of the four arms has an ornate, fifteenth-century, painted wooden ceiling.