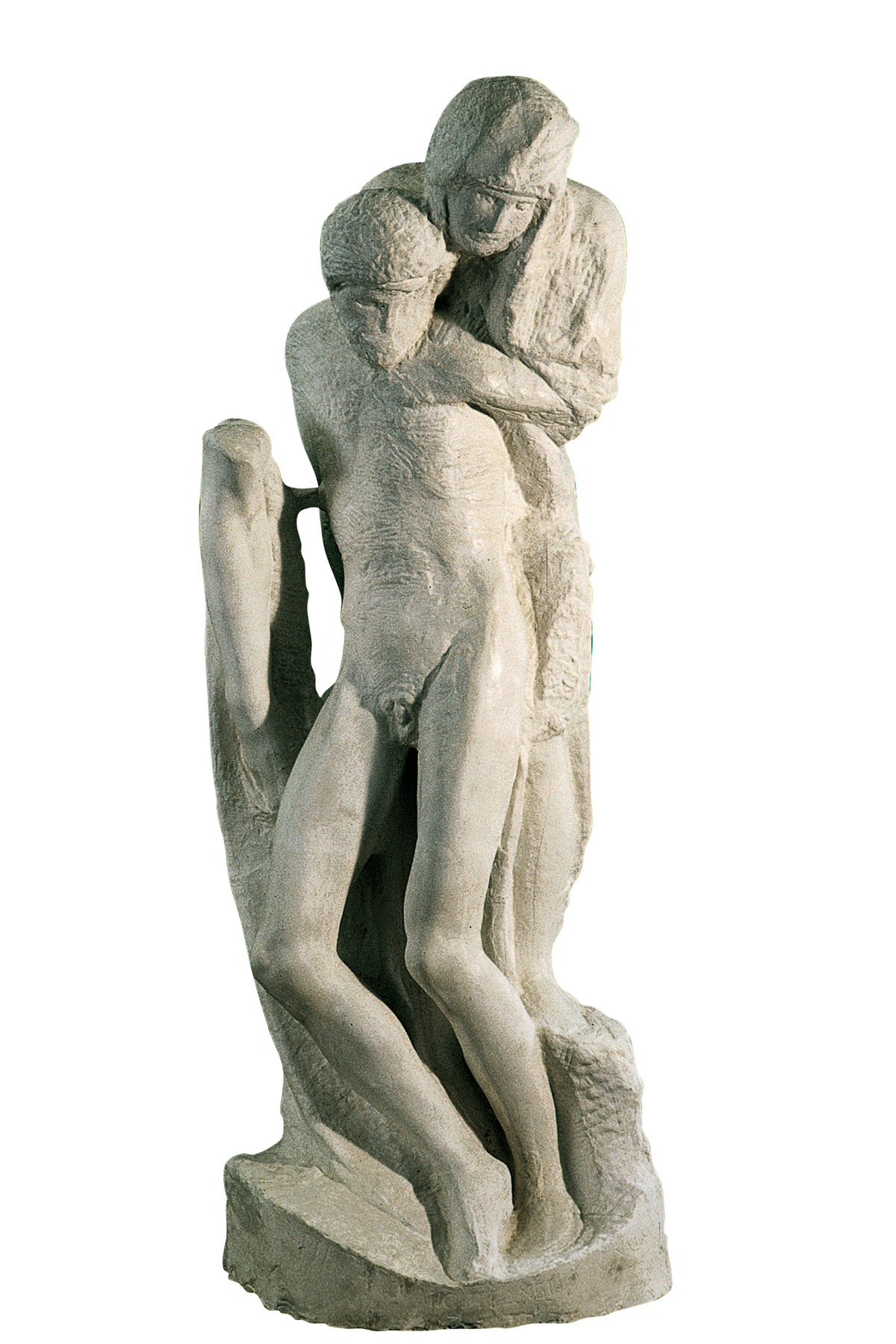 “I have all the ailments that afflict the elderly, I am so old, but I am sculpting another Pietà. God grant that I may finish it”, Michelangelo Buonarroti.

The 195cm-high copy, on show at the Museo Omero, is a copy in alabaster plaster of a true cast of the marble original which is conserved at the Museo Civico del Castello Sforzesco in Milan.

Throughout his life, Buonarroti had constantly explored his expressive capabilities and he was in his nineties when he returned to this, his final, work.
Iconographically, it shows the moment after the deposition from the Cross when Mary takes the body of Christ in her arms. But this extreme masterpiece is a Pietà pushed to the point of agony, where the figures of the mother and son are brought so closely together that they merge: the lifeless figure of Jesus conveys all the heaviness of a dead body while Mary, standing behind him, supports him in an embrace, almost absorbing him into herself.
Their heads share the same posture: bent slightly downwards, to the left, with their eyes looking at the ground.
The verticality of the composition establishes a solid unity between the two protagonists: mother and son. There is poetry in the contrast between this solidity and the incomplete state of the statue.
Any search for anatomical perfection in this work will be fruitless and the “unfinished nature” of the modelling of the volumes and the definition of the surfaces, appears to deliberately negate the physical substance of the figures, giving life to a completely spiritualized image.
The marks left by the toothed chisels that Michelangelo used to model the marble before the final polishing, are perceptible to touch and sight. The surface transmits the passion and ardour of Michelangelo’s feelings, now that his gaze is turned inwards.
The group is made up of parts at various stages of completion. Some, such as Christ’s beautiful right arm, are finished while, in others, evidence of previous versions can be seen: for example, the original position of the Virgin’s face was clearly different.
Other parts, such as Christ’s torso and Mary’s body were still being worked on.

Michelangelo began the sculpture in about 1552 and came back to it in the final years of his life, working on it right up until the eve of his death in 1564. He altered the composition, the postures of the heads and the arms, several times. The extremely tormented carving process conveys the very high degree of lyricism he achieved.
The artist’s death prevented its completion, but it is possible that Michelangelo actually wanted to stop at this, truly tragic, stage of the work, which bears witness to his passionate relationship with the material. This is a more painful Pietà, very different from the typical iconography of the subject and worlds apart from the Pietà he carved in his youth.
The work is named after the Palazzo Rondanini in Rome as the sculpture graced its courtyard for several centuries.