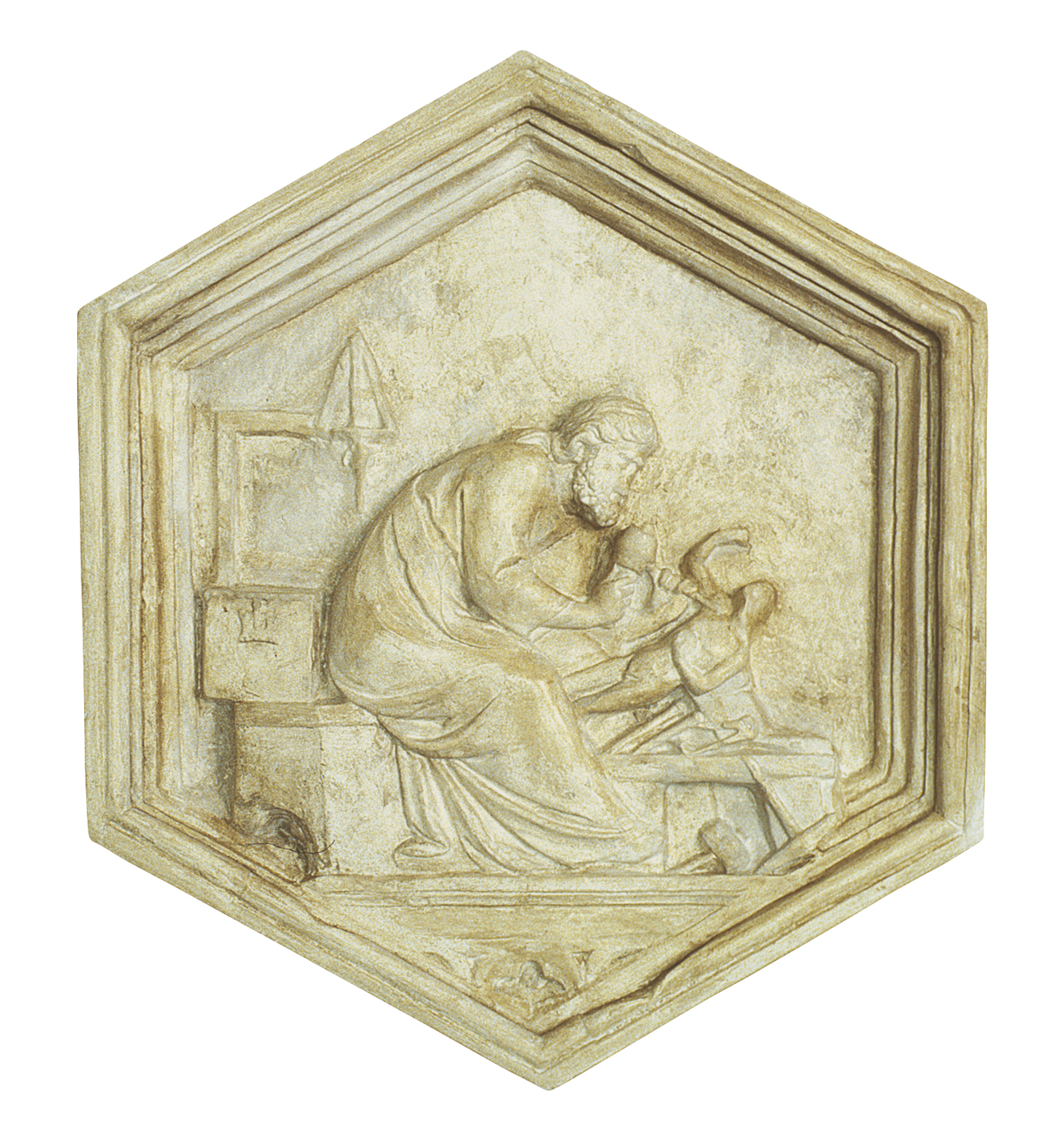 “The art of Sculpture among all art, where drawing is involved, is seven times greater; because a statue of Sculpture must have eight views, and they should all be equally good”, Bevenuto Cellini.

“Fidia o l’arte della scultura” (Phidias or the art of sculpture) is the subject of this panel carved by Andrea Pisano and pupils in the mid-1300s for Giotto’s Bell tower for the Cathedral of Santa Maria del Fiore in Florence.
The Museo Omero has a copy in alabaster plaster from a true cast, which is about 44 cm wide. The marble original is on display in the Museo del Duomo in Florence. For conservation purposes, all the sculptural decorations for the bell tower have been replaced by copies.

The hexagonal panel was placed in the first order (north side) of the bell tower, which is dedicated to intellectual activities. In centre of the composition, a sculptor is at work. He is shown seated, in profile, as he leans forward, intent on sculpting a statue. The art of sculpture is identified with Phidias, the sculptor par excellence of classical antiquity, who was active in the major temples of Greece around 400 BCE.
The artist, with a thick beard and hair (clearly perceptible to the touch) is dressed in a long tunic whose folds generate movement and which also defines the figure’s leg. Phidias, with a hammer in his right hand and a chisel in his left, is working on a naked body, perhaps an athlete, who has one arm raised and the other folded across his stomach. Under the statue, there is a bench with the tools of the trade beside it. The smooth, indefinite background to the scene allows the figure of the sculptor to emerge in the foreground and be clearly distinguishable to the touch.

The construction of the bell tower of Santa Maria del Fiore in Florence, begun by Giotto in 1334, was a great novelty. It is an imposing tower, both elegant and slender, with a square base. It is 84.7m high and about 15m wide and is decorated with white, red and green marbles like those adorning the Cathedral. The architecture is in the Florentine-Gothic style with rich sculptural decoration. The first order is embellished with twenty-six hexagonal marble panels with relief carvings illustrating the history of the man’s progress in the arts and sciences: from man’s earliest activities corresponding to natural needs (west side), to the representation of the crafts arising from civilization (south side), up to artistic activities (east side) and intellectual activities (north side). The theme of the cycle is work, which is seen as a creative expression of a free man, and it reflects the cultural context in which it is located: a city that flourished in the fourteenth century thanks to the entrepreneurial and intellectual activities of its citizens. Thus, the idea of man fulfilling himself through work underpins not only the greatness achieved by Florence, but also this Christian building that rises towards heaven and therefore towards God.