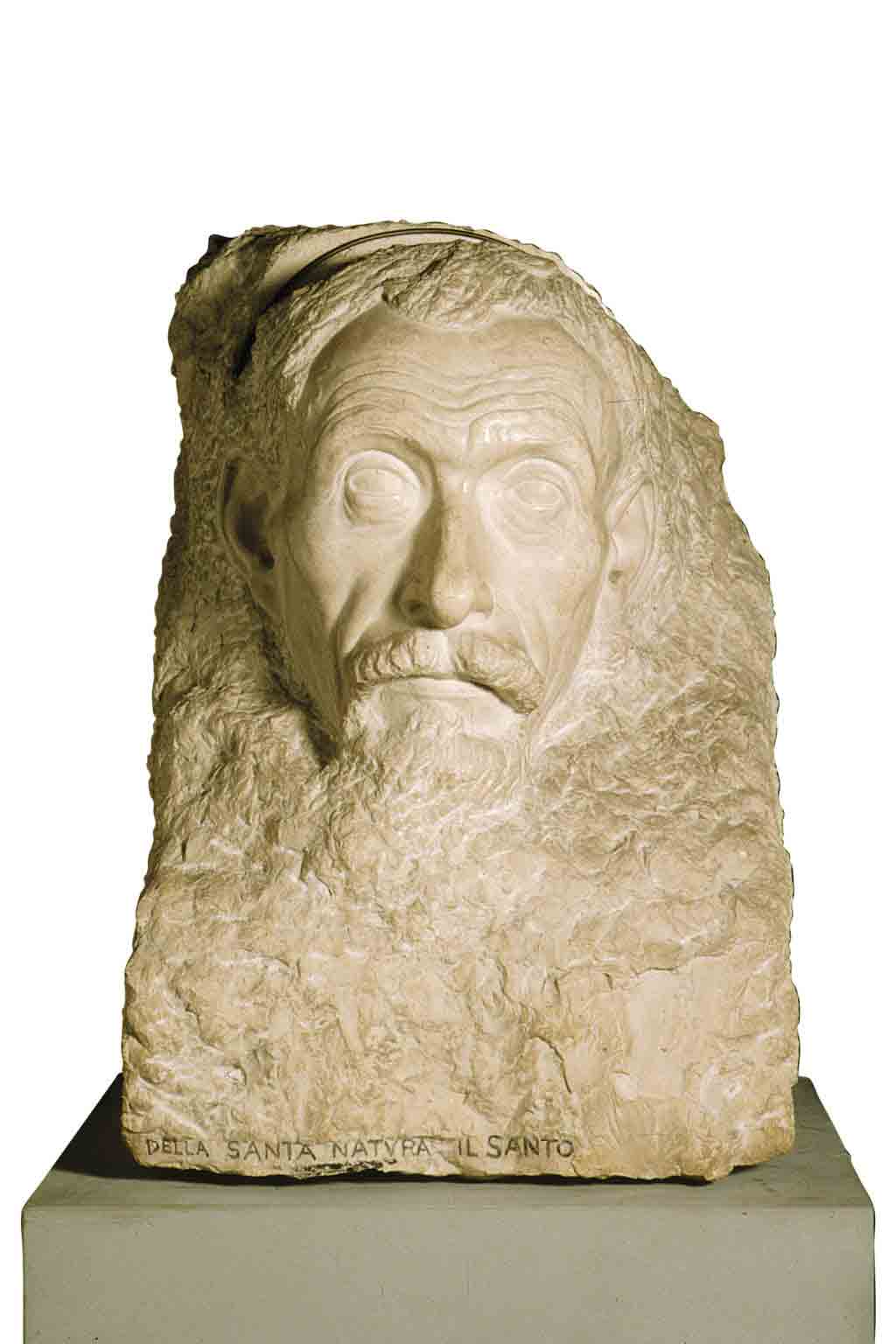 “Morelli’s sculpture is uninterruptedly characterized by a refined compositional mastery and his modelling is expressive, incisive or lively, skilfully interplaying light and shadow, often with pictorial finishes, all of such high quality that his works are precious and his portraits unforgettable.”
Massimo Di Matteo, Tribute to Vittorio Morelli

Vittorio Morelli carved this sculpture from Trani stone in 1928. The face of St. Francis emerges from a 42cm high block of rough, unfinished stone.
The face of the Saint, who is shown as an old man, is elongated and hollow, with very pronounced cheekbones. The eyes, sunken and devoid of iris, are wide open and gaze towards infinity. They seem to be looking upwards as if responding to a divine call.
This almost exaggerated eye-opening raises the brow ridges and accentuates the formation of deep wavy wrinkles on the forehead. The skin at the sides of the nose and around the eye sockets also shows signs of old age. The nose is slightly uneven, the mouth almost hidden by the full moustache, while the goatee beard merges into the rough stone that makes up the lower part of the block. A semi-circular metal halo on his head emerges from the stone, easily perceptible to the touch because of the diversity of the materials.
The face is particularly intense and expressive: the sculptor has made tangible the Saint’s ascetic suffering, but also his faith, conveyed in his looking up to the heavens. To the touch, the perception is of a rough surface, which becomes smoother over the face which has been polished to shininess.

Morelli’s language is not always realistic and shows some references to Giotto’s primitivism and the Italian Renaissance tradition. From the 1920s onwards, he was considerably influenced by the celebratory rhetoric typical of state (Fascist) art.

The artist was always extremely attached to Ancona, his hometown, for which he designed numerous artistic and architectural works, including a statue of the famous wooden marionette for the area of Ancona known as Il Pinocchio. Sculptor, draftsman, architect, Morelli was a multifaceted artist who never wanted to separate art from civic commitment.