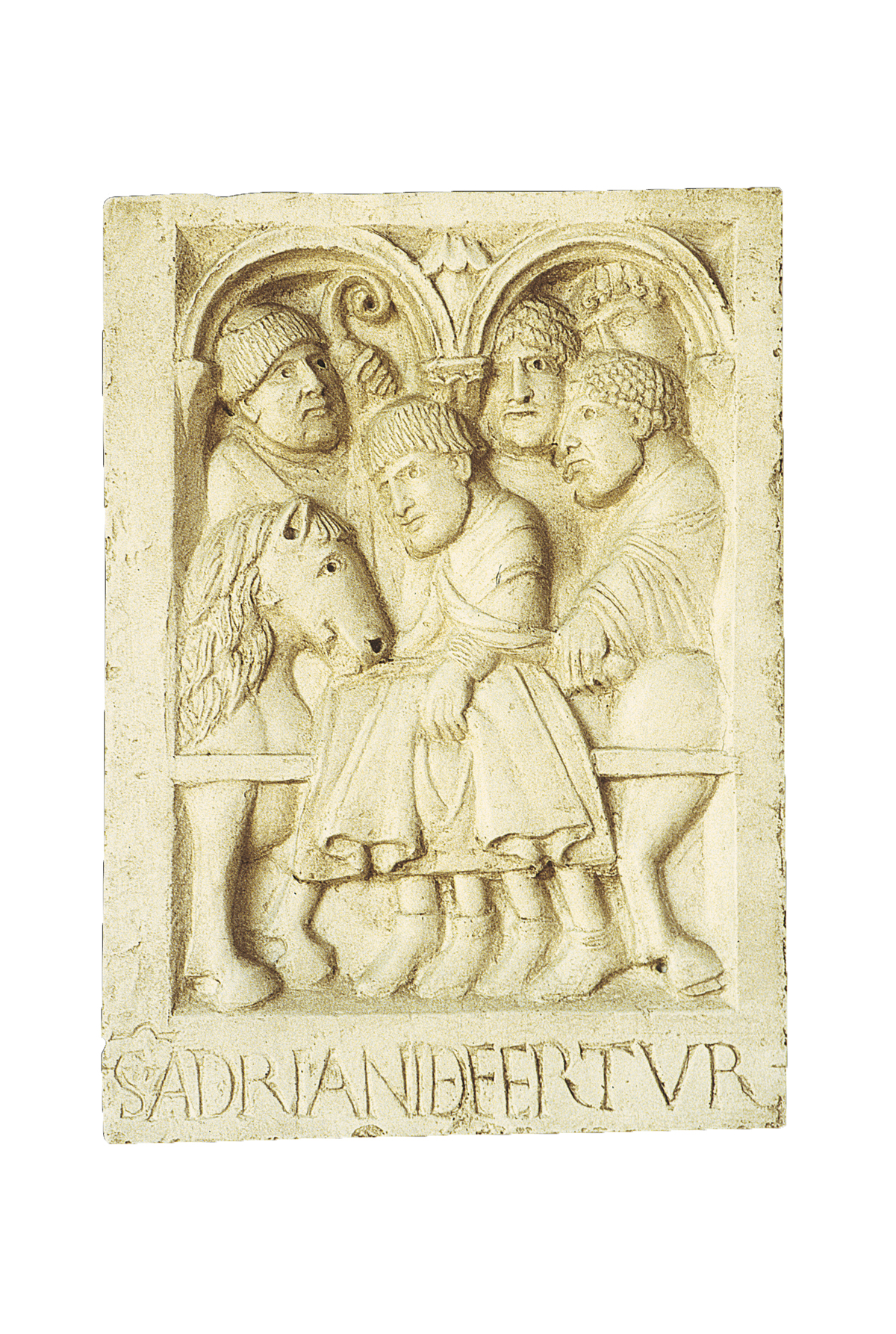 “They are stones that speak of men and women of the people and of the nobility, of the poor and the rich, of saints and sinners; they are testimony of the cultures and societies that have succeeded one another over various historical periods; they give voice to the intimate hearts of hosts of wayfaring pilgrims”, Erio Castellucci, Archbishop Abbot of Modena-Nonantola.

One of these is the rectangular panel that depicts a group of monks transporting the body of Pope Adrian III to the abbey, an event that took place in 885 CE.
The panel is 44cm high and vertically oriented. The scene is surmounted by two round arches. In the foreground, covered by a pall, the body of the pope lies on a litter which is carried by two horses. The head, chest and forelegs of the horse on the left are visible while only the hind legs of the leading horse can be seen.

Five monks make up the funeral cortège. One of them, of whom only the face, shown in three quarters, and the bust are visible, occupies almost the entire area below the arch on the left. He holds a shepherd’s crook, a willow branch ending in a curved shape, the symbol of the spiritual guide of the people of God.
In the centre, just below the point where the two arches join, the figure of a monk appears to be leaning forward in order to tighten the pall covering the body. Finally, below the right arch, three other figures are clustered together.
The scene is divided horizontally by the litter and vertically by the arches. It appears crowded, with the heavy figures of the monks completely filling the available space.

The origin of the abbey dates from 752 CE when Aistulf, King of the Lombards, donated some land to his brother-in-law Anselm, saint and founder of the abbey. Named after St. Sylvester, whose relics it houses, it became a Benedictine monastery and a place of hospitality and pilgrimage. This panel is on the left doorjamb, among other episodes from the history of the Abbey.

The panels are of different sizes but are all rectangular. Most of the scenes depicted are surmounted by two round arches and are vertically oriented. There are two sequences, with the earliest episodes at the bottom. The series on the right doorjamb shows stories from the childhood of Jesus, while the panels on the left illustrate episodes from the history of Nonantola Abbey, with particular reference to the figures of St. Anselm, St. Sylvester and St. Adrian.