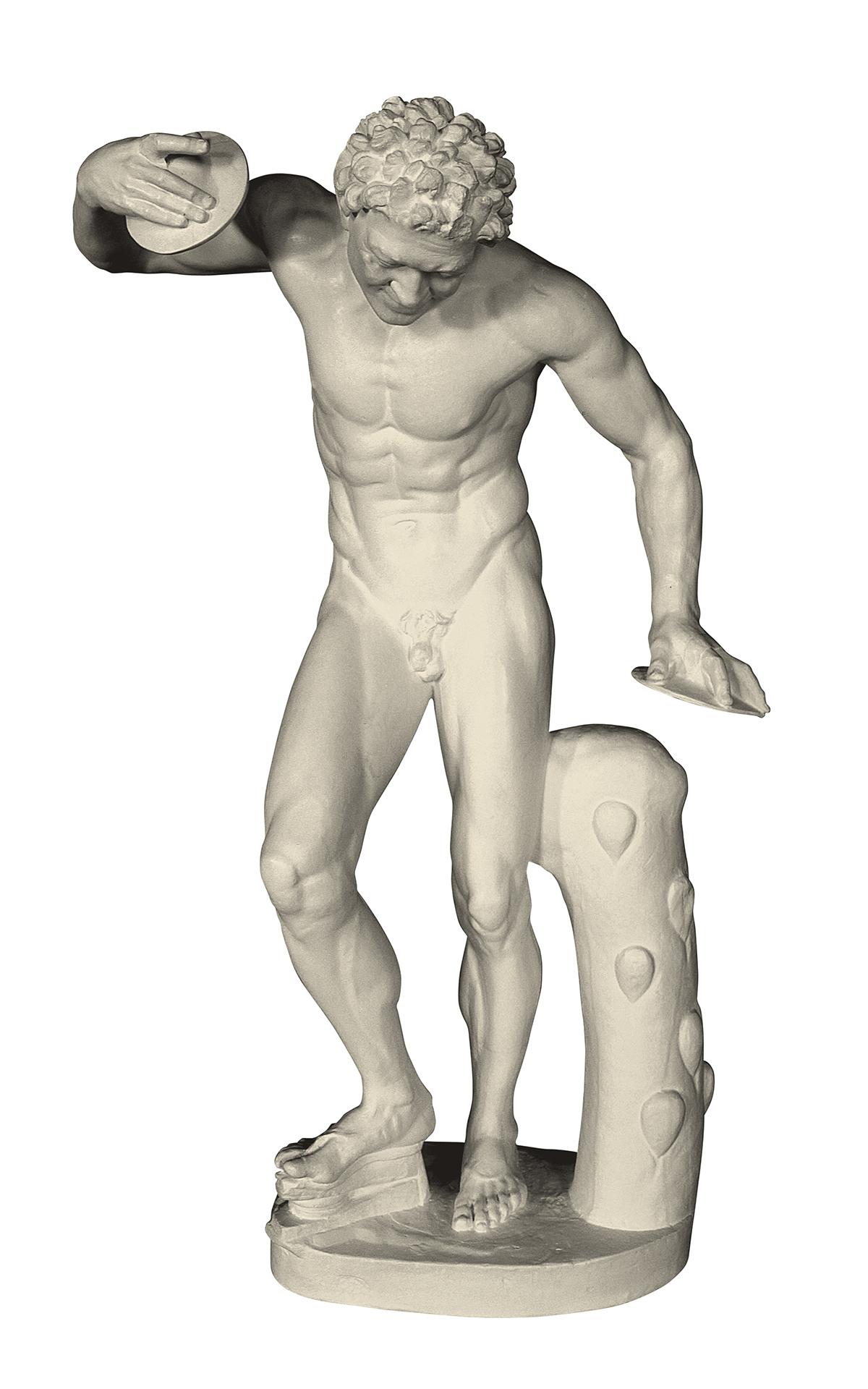 “Our Faun, depicted in virile age, and strong, with the facial and bodily features of an uncouth inhabitant of the woods. The horns he bears on his forehead are his emblem… the attitude of his body shows that he is practicing those Satyrs’ dances”. Paolo Alessandro Maffei “Collection of ancient and contemporary sculptures”.

With these words, Paolo Alessandro Maffei described The Dancing Satyr, named “De’ Medici” because it belonged to the collection of the same name. It is a Roman copy, carved in marble, from a bronze original made around 200 BCE. The Satyr was once part of a sculptural group named “Invitation to dance” (housed at La Tribuna degli Uffizi since 1588).

The naked figure (143cm tall) is completely absorbed in his dance. His right arm is raised and bent sharply at the elbow while his left arm is lowered and pushed backwards. He accompanies his dance with two instruments: a pair of cymbals, that are only slightly bigger than his hands, and a kroupezion (a wooden percussion instrument shaped like a sandal with a metal clapper to make the sound louder and clearer) which he plays with his right foot to keep time. His extended left leg rests against the tree-trunk shaped prop which helps support the weight of the statue. His head is tilted forward and turned slightly to his left.

The sculpture shows the artist’s attention to naturalistic detail. The anatomy has been carefully studied and the straining muscles are reproduced with great accuracy making the end result harmonious. His face has strongly marked, rough features: his cheekbones and brow ridges protrude sharply, deep wrinkles mark his face, emphasizing the almost hysterical laugh that animates his expression. His short bristly locks partially conceal his satyr’s pointed ears and small horns.

Supplementary worksheet on the mythological figure of the Satyr. The Satyr is a figure from Greek mythology who lives in woods and mountains. He is the personification of fertility and of nature’s life force, and is linked to the cult of Dionysius. Satyrs are usually depicted as bearded humans with animal characteristics such as horns, tail and goat legs. They are represented as lustful beings, often devoted to wine, dancing with nymphs and playing the flute. The most important was Silenus, a minor deity associated with fertility (like Priapus and Hermes).

The work was purchased thanks to a contribution from Arcus Spa. It is part of our Travelling Section (Movement theme).