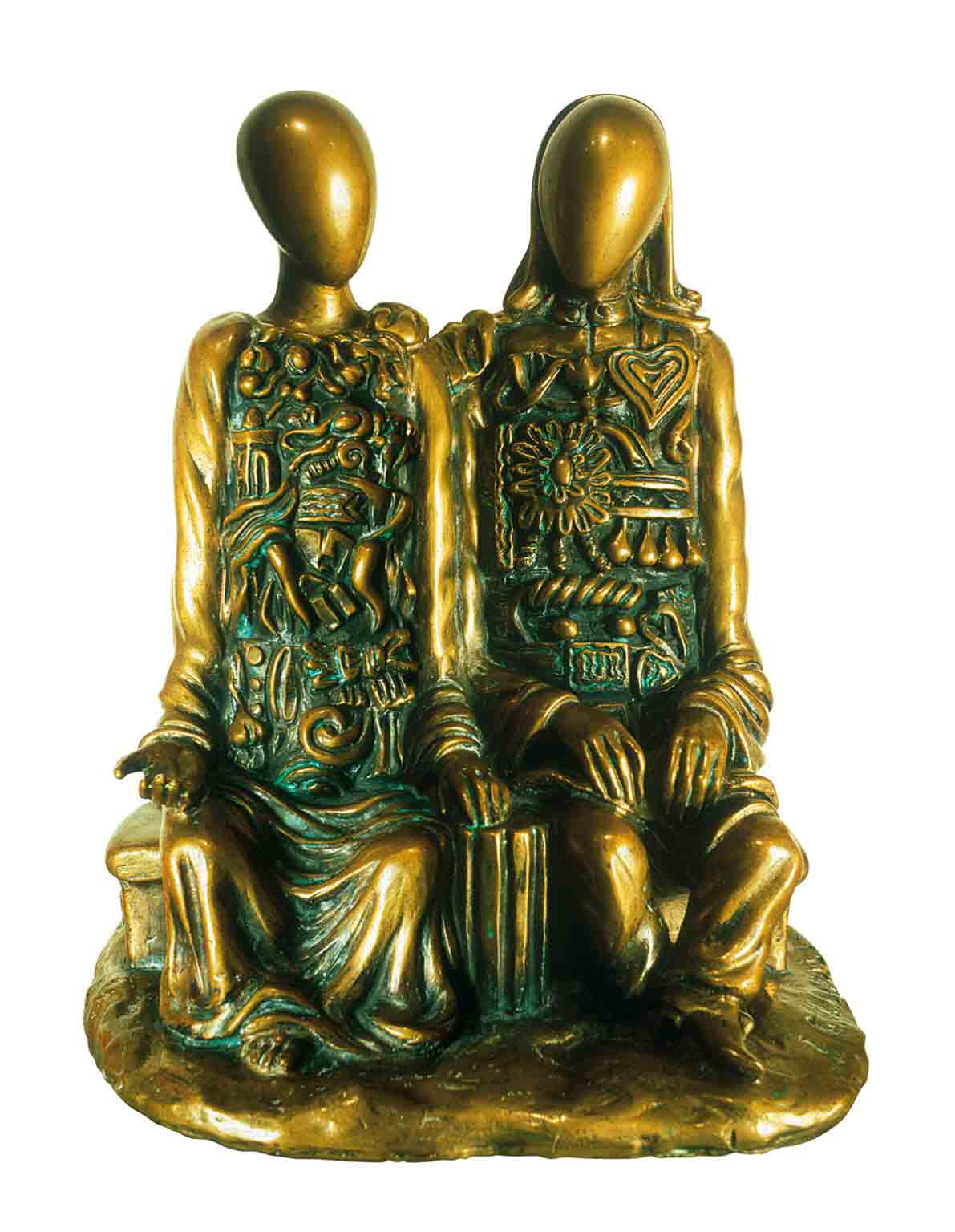 “The figurine is an object that has the appearance of a man, but without his movement and life; the figurine is profoundly not-alive and this lack of life repels us and makes it odious. Its  simultaneously human and monstrous aspect scares and irritates us”, Giorgio de Chirico.

“Manichini coloniali” is the translation into a patinated bronze sculpture, of a 1943 painting of the same name.

It depicts a pair of figures sitting side by side on a low seat. The faces are smooth ovals completely devoid of human features. The figure on the left has its left hand on a plinth shaped like a Doric column, while its right hand rests on its thigh with the palm turned upwards. The hands of the figurine on the right are resting in its lap. Both figurines have their heads turned slightly inwards as if to look at each other.
Their clothes are different: a long tunic partially covers the bare feet of the figure on the left, while the figure on the right is wearing shoes and trousers as well as a veil that covers the back of its head. Both are wearing intricate displays of objects on their chests and abdomens. The decorations are stylised but recognizable, probably inspired by the artist’s imagination and his past.

De Chirico’s “Figurine” period inaugurated one the most fascinating and adventurous periods of his career. From what the artist himself wrote, we know how much the idea of the figurine perturbed and obsessed him, which drove him to depict them repeatedly in many of his works. He places them side by side, separates them, distinguishes them by giving them new attributes or names: Hector and Andromache, The Troubadour, The Poet, The Painter, The Philosopher, The Archaeologist. Sometimes they lack arms or hands, or have limbs replaced by set squares and rulers which act as crutches.

“De Chirico’s figurine is a sculptural vehicle rather than an real character, whose structure is both complex and elementary. It is a machine but is also a supernatural being, a reasoned skeleton, a kind of mathematical androgynous creature composed of set squares, with a featureless oval head or a projecting profile. There is something solemn and disturbing about it. The shell of an, as yet unidentified, ancient or future hero”, taken from Ebdomero, Giorgio De Chirico, 1957.