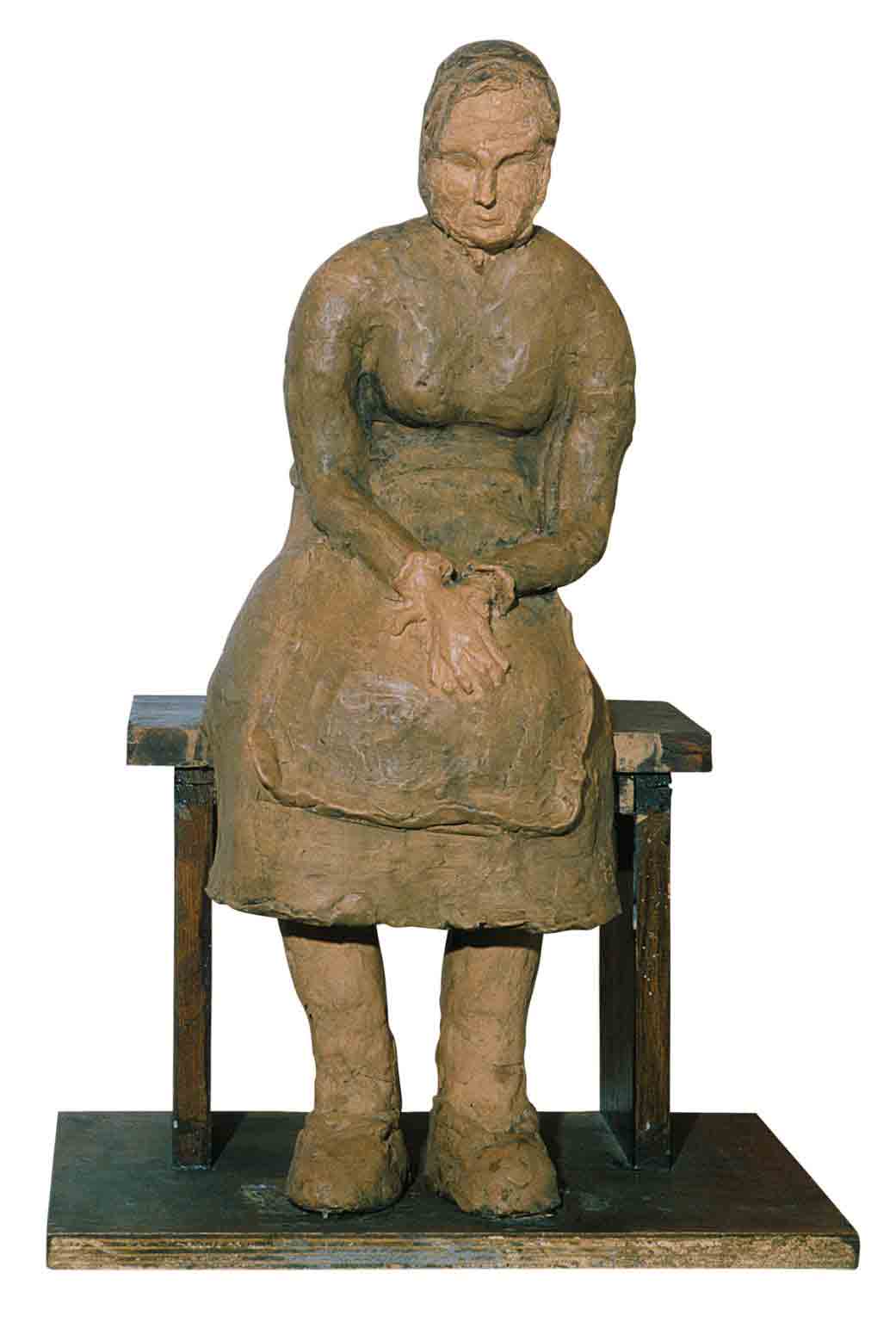 “I dived down into my memory, to seek out and reconstruct all those images I had seen during the early years of my life. Grandmother from the South, for example, represents a woman I had seen in Foggia, when I was a child”, Felice Tagliaferri.

Nonna del Sud is an 82cm tall sculpture in terracotta and wood that Felice Tagliaferri made in 2006.

The work shows an elderly woman, seated on a rectangular wooden stool, with her shoulders curved slightly forwards. She wears a kerchief tied under her chin, an apron over a simple long-sleeved, calf-length dress and a pair of flat closed shoes or slippers.
The woman’s hands are placed one on top of the other, resting on her knees, her shoulders are hunched, her head bowed. Her face is small with a thin nose and lips, sunken eyes and slightly hollow cheeks.
The sculptor has rendered the facial signs of old age in a very accentuated manner, carving deep wrinkles around the eyes and mouth as well as on the forehead.

Caressing this old grandmother, we can feel the artist’s modelling work which has left the surface not perfectly smoothed, thus allowing our hands to perceive reliefs, hollows, fingerprints. In the space under the skirt, which was hollowed out for firing the work, the terracotta feels even rougher.

An elderly woman sits, perhaps in the open air, still feeling the fresh air, perhaps waiting patiently for someone, a symbol of waiting in a suspended time.
As the artist has stated, “Grandmother from the South” is a still image of a memory, an impression, in material, of a familiar figure from his childhood: the elderly women from his home in Puglia in the far south of Italy.
The colours also speak to us of the earth, with various shades of brown, tending towards orange in some parts and towards black in others.

Tagliaferri has summed up his art in the slogan “Give form to dreams”, in the firm belief that sculpture is the art form par excellence for uniting the world of the sighted with that of the blind. His sculptures are created without ever being seen. They first take shape in his mind, inspired by memories and stories, and are then brought to life by his skilful hands that work wood, marble and stone as well as terracotta.