The completion of the first phase of the Art within Art project was presented to a crowded and enthusiastic press conference on Tuesday 24th June 2008.

“Art within art” is a project which aims to increase the scholastic and social integration of the partially-sighted through valid and significant art education as well as through access to, and enjoyment of, our artistic heritage, and architecture in particular.
Taking the school-territory link as a starting point, the project relaunches art as a factor in the integration of the visually handicapped. It began in 2005 with a formal agreement signed by the Ufficio Scolastico Regionale per le Marche, the Museo Tattile Statale Omero, the Unione Italiana dei Ciechi and the Università Politecnica delle Marche.

The Model Exhibition : June to September

The teachers and students from the Istituti Statali d’Arte of the Marches Region who took part the project created scale models of four important monuments situated in our region. These models will later be placed in their respective monuments.
The models are of: Porta Pia, Ancona, made of bronze by the ISA “Mannucci”; the Baptistry, Ascoli Piceno, made of plaster and powdered marble by the ISA “Licini”; the Rocca Costanza, Pesaro, made of alluminium by the ISA “Mengaroni”; decorative panels from the front and side portals of the Cathedral, Fermo, made of resin and terracotta by the ISA “Preziotti”. The models will be on show all summer in the Architecture Section of the Museo Omero.
Thanks to the participation of the Istituti d’Arte, the students became more aware of the richness of their area and were able to engage with topics such as visual handicap and, in particular, approaching works of art through touch.

“The results are excellent,” declared Aldo Grassini, “not only from a scientific and tactile point of view, but also in artistic terms. These are artistic creations of a very high level. The orginal monument has acquired a piece of art of great beauty which will allow not only the blind and the partially-sighted but all visitors, to admire the complexity and the totality of the monument. As a matter of fact, visitors are rarely able to perceive the architecture of a church or old building as a whole”.

Manager at our Learning Services, thanked the D.A.R.D.U.S. (Dipartimento Architettura Rilievo Disegno Urbanistica Storia) of the Università Politecnica delle Marche and, in particular, Professor Francesco Leoni, for providing documentation which was very useful for creating the models.
Professor Leoni, who was also present at the press conference, will be in charge of choosing the most significant and fruitful setting for each model within its monument.
Anna Maria Nardiello of the Ufficio Scolastico Provinciale confirmed their great interest and willingness to continue through the next phases which will definitely see the reinforcement and widening of the project outlines that have been so successfully put into practice.

The second phase of the project, where the models will be placed in their own monuments, will start in September: a real experience of “art within art” which should encourage tactile exploration and not just among the partially-sighted. Everyone will be able to enjoy an unusual “duplication” of a local work of art inside its own monument as well as a multi-sensory stimulus promoted by a comprehensive vision of the work and the possibility of enjoying it through touch.
The non-sighted will therefore be able to explore the work in a natural context within the monument in the company of other visitors, rather than seeing it in in isolation in a separate, museum environment.

The project has drawn on the experience of experts in the fields of: training and teaching; scientific aspects of the architecture sector;
teaching the partially-sighted; tactile education through artistic experience.
The Museo Tattile Statale Omero, with its years of experience in the field of tactile education, and the Unione Italiana Ciechi e degli Ipovedenti provided essential consultancy for the various phases of the project as did the Università Politecnica delle Marche, through the D.A.R.D.U.S. (Dipartimento Architettura Rilievo Disegno Urbanistica Storia). The Ufficio Scolastico Regionale provided the finance for the Istituti d¹Arte delle Regione Marche that created the models.

The future of the project

It is planned to produce a DVD documenting the various phases of the project. This will be an important contribution to the culture of tactile
education as well as an account of an innovative way of learning about the history and artistic heritage of the Marches. Being an easily reproducible medium, it will be readily available.
This project is unique in Italy and should be considered as a pilot project carried out in our region. The Ministero dell’Istruzione, dell’Università e della Ricerca will be examining the possibility of extending this experiment throughout Italy, in particular, the scale model aspect and the teacher training aspect through the creation of on-line training systems, with the prospect of using an integrated e-learning environment. 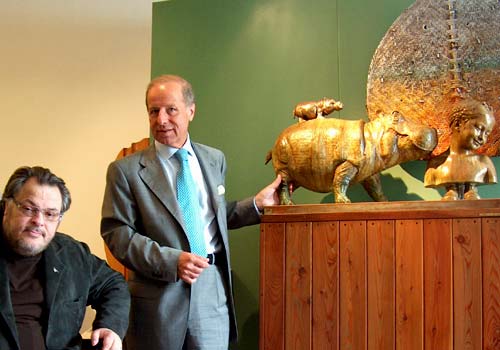 Two exhibitions will be held next autumn in the Czech Republic, through the good offices of the Italian Ambassador, Fabio Pigliapoco.
An important acknowledgement for a unique institution.

At a press conference held in Ancona Town Hall on 18 June, Fabio Pigliapoco, Italian Ambassador to the Czech Republic, Fabio Sturani, Mayor of Ancona and Roberto Farroni, Director of the Museo Statale Tattile Omero announced their
project for a double exhibition to be held this autumn in Prague and Cerna Hora (Moravia) in collaboration with SONS (a national association of the blind and partially-sighted) where a wide-ranging selection of works from the Museo Omero collection will travel to the Czech Republic.

The Italian Ambassador has been active in securing the premises for the main exhibition in Prague which will open on 20 November in the prestigious premises of the Italian Cultural Institute and, more precisely, in the splendid former Palatine Church within the seventeenth century former Ospedale degli Italiani.

“The Museo Omero is one of the best aspects of our city” – said Ambassador Pigliapoco, a native of Ancona, “and I am proud to present it in Prague. It will be the event of the year; the Minister of Culture and several representatives of Czech and Italian institutions will certainly be present.

“The event, which will increase the standing of the entire Marches region, will be given a very high profile” he continued “and will be promoted in the schools and art schools so that it can be enjoyed by everyone, naturally, and not only by the non-sighted.”
Mayor Sturani, who has been in working with the Ambassador on this high level project for some time, expressed his great satisfaction, and Roberto Farroni reminded listeners of the recent inititiatives undertaken by the Tactile Museum in various European countries. “The Czech double exhibition project” he added, “crowns the efforts we have made to publicize a unique institution which contributes to increasing international awareness of barrier-free culture and access to extra-visual art, elements that are decisive for the visually handicapped but also capable of providing a unique experience for everybody.

The exhibition project by Massimo Di Matteo (also present at the press conference) features a large number, around twenty, of the Museum’s works, including the Poseidon and the architectural model of the Parthenon for the Greek section, the casts of the two Michelangelo Pietàs (San Pietro and Rondinini) for the Renaissance, and Della Santa Natura Il Santo, an original sculpture by Vittorio Morelli for the contemporary section. Furthermore, an area will be entirely dedicated to works in marble and terracotta by the non-sighted sculptor Felice Tagliaferri, who has been promoted by the Museum for some time.

A smaller version of the exhibition will be held before this in the Public Library of Cerna Hora, a pleasant mountain resort in Moravia. This little
town is the home of the oldest real beer brewery in the Czech republic, the “Cerna Hora”, managed by Jiri Fusek who is also president of the non-industrial Brewery Circuit of Europe and has helped to put on this event.

The fact that the “iGuzzini” company (world leader in the field of lighting technique) has taken part in the “Learn about Form: The dancing Satyr of Mazara del Vallo” project, is an important added value. The Museo Omero provided scientific consultancy and managed to take the exhibition to the Louvre in 2007 for the “Praxiteles” exhibition. This is a perfect copy of the splendid sculpture attributed to Praxiteles, which was found in the Sicilian Channel in 1997. It has been revisited by iGuzzini, in collaboration with the Laboratorio di Fisica dell’Istituto Centrale per il Restauro di Roma, using the most modern illumination resources available.

The “Accademia dello Stoccafisso” of Ancona will organizing a wine and gastronomy evening, to accompany the Prague exhibition. “We aim – explained their president Bruno Bravetti “to make one of the main traditional dishes of Ancona better known.”
To conclude the evening, Ambassador Pigliapoco has guaranteed his efforts to promote a European tour for the Museo Omero’s extraordinary and touching collection which he recently visited blindfold, experiencing powerful emotions. 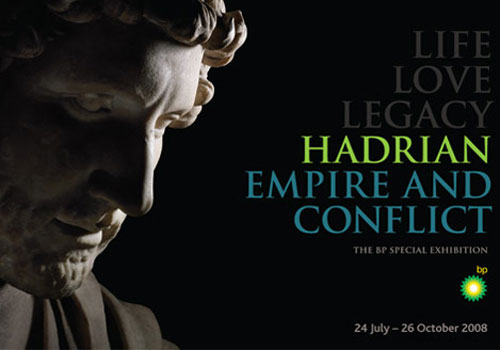 Following an
invitation from the British Museum concerning their “Hadrian Empire and Conflict” exhibition (open to the public 24th July to 26th October), a work from our collection – the architectural model of the Pantheon – will be enriching this important exhibition on the life, loves and legacy of Hadrian, the great and enigmatic emperor of Rome who ruled from 117 to 138 A.D.).

Our collaborator Massimiliano Trubbiani will be accompanying the work to London and helping to set up the exhibition from 18th to 20th June. The inauguration will take place on Wednesday 23rd July 2008. After the Louvre in Parigi, the Archeological Museum in Spalato and the recent “Art for the Blind” festival in the Czech Republic, it is now the turn of the best known museum in London: another international acknowledgement consolidating the Museo Omero’s importance at a European level.